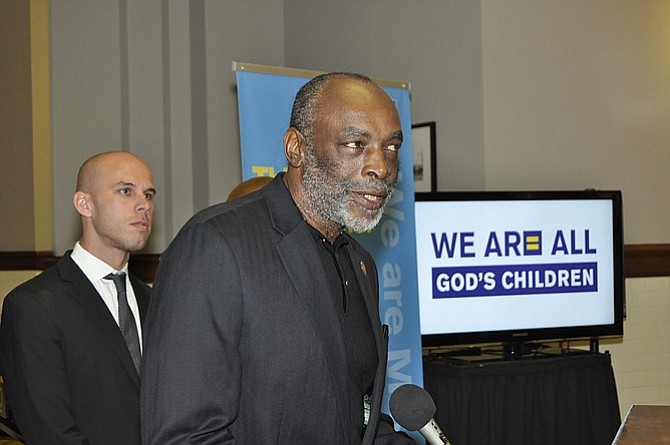 Rep. Jim Evans, D-Jackson, supports tuition equity for immigrant students, suggesting that to be against it is to be a terrorist. Photo by Trip Burns.

Women's rights and public education topped the Mississippi legislative agenda as it rolled past the Jan. 19 deadline for filing bills and into the fourth week of the session, while a move by a Democratic lawmaker to limit LGBT custody of children roiled many members of his own party.

Meantime, supporters of immigrant rights rallied at the Capitol looking for more attention to the controversial issue of educating undocumented students.

In the midst of it all, Gov. Phil Bryant gave his State of the State speech Wednesday, focusing on economic development and steering clear of many divisive wedge issues.

Authored by a Democrat, Rep. Bob Evans from Monticello, the bill would amend Mississippi's constitution to "create a rebuttable presumption that placing a child in the sole custody of a homosexual parent or person is not in the best interest of the child."

The bill, House Bill 714, surprised Democrats in the House, who aren't sure what motives Evans may have.

"It don't sound like him at all," said Rep. Steve Holland, D-Plantersville.

Holland said Evans' constituents may have asked for the language in the bill. “I’ve introduced some bills that I wasn’t too damn proud of, but I’m the only representative my 27,000 people have,” Holland said.

While Holland said he might introduce a bill he doesn’t necessarily agree with because the Mississippians he represents want it, he would “work like hell to kill it.”

Evans has not returned calls to the Jackson Free Press, nor has he responded to comments regarding the bill on his Facebook political page.

In his State of the State remarks on education, Bryant focused on his "third-grade reading-gate bill" that passed last year, which prevents any third grader who is not reading on grade level by the end of the year from promoting to fourth grade.

When Rep. Charles Young, D-Meridian, asked superintendents from public schools in Jackson, Hattiesburg and McComb about the impact the recently adopted third-grade reading gate would have on elementary schools around the state, they were unable to answer.

"It's something I wish we all had the answer to," said James Bacchus, McComb School District Superintendent, at an education forum Wednesday.

Young said that in his district, Meridian Public School District, only 17 to 18 percent of third graders passed the initial reading test. The Mississippi Department of Education, Young said, estimates that 6,500 to 8,500 children will not pass and will be held back.

"That's a lot of children in our state," Young said. "For next year, that means a lot of students are not going to have a fourth grade. If we have a teacher shortage now, what's going to take place with all those kids being held back in third grade?" Young said.

In his speech, Bryant also touted modest increases for the Mississippi Adequate Education Program, a formula for education and his executive budget recommendation.

Rep. David Baria, D-Bay St. Louis, introduced House Bill 120 to require the Legislature to fully fund the Mississippi Adequate Education Program beginning in fiscal year 2016. But in the Jan. 20 House Education Committee meeting, its chairman, Rep. John Moore, R-Brandon, made it clear that bill would not be a priority.

“I think everybody can tell from what’s been going on around the Capitol the last few days,” Baria said, “that full funding of public education in Mississippi is not a priority for the Republican leadership.” Baria was referencing to the earlier alternative ballot measure to Initiative 42 that passed with a party-line vote. Republicans voted to put the measure on the November ballot in addition to the citizen initiative that would force the Legislature to follow state law and fully fund MAEP, which it has refused to do in most recent years.

Speaker of the House Philip Gunn enjoyed a hollow victory last week when his chamber voted 95-21 to give all of the authority to decide school curriculum to local school boards—which is already the law.

"All we're doing with this is we are agreeing with existing policy," House Education Chairman Moore said of Gunn's bill.

"Just to be clear," Democrat Rep. David Baria from Bay St. Louis said on the floor, the bill would stop the "dirty rotten scoundrels in Washington from imposing their communist agenda on our school curricula?"

"You just hit the nail on the head," Moore responded sarcastically.

HB 156, which Gunn also introduced, would remove the "requirement that the state Department of Education form a single accountability system by combining the state system with the federal system." The bill also renames Common Core "Mississippi College and Career-Ready Standards." But it was unclear to many lawmakers what the bill would actually do. It passed 92-25.

While Moore said the bill does not deal with Common Core, Mississippi's academic standards are exactly what many Democratic lawmakers wanted to discuss.

“It would detach (Common Core) from consortium that kind of linked us to the federal standards. We’ll still have to abide by federal law, but the way the law was written, any change that we made at all in our standards had to be approved by the U.S. Department of Education and I believe what this does is detach us from that,” Moore said. “It puts it back totally under our control as far as the standards themselves.”

Moore's House Bill 449 would create penalties for any school-district personnel who engage in political activity while on school grounds. The bill defines political activity as any efforts with the purpose of supporting or opposing any political party, ideology or issue, including campaigning during an election. The penalties for violation include a $10,000 fine and, on second conviction, a misdemeanor charge and loss of education license.

Senate Bill 2138, authored by Sen. Philip Gandy, R-Waynesboro, would increase the waiting period for a woman to have an abortion from 24 to 72 hours. This is just one of the many bills in Mississippi's legislative history aimed at limiting a woman's ability to have an abortion.

Because Mississippi has only one abortion clinic, Jackson Women's Health Organization, the waiting requirement may create a greater burden for women traveling long distances to receive the procedure.

Personhood, a previously failed attempt at abolishing abortion, also made its way back to the Mississippi Legislature this session as well, after a previous statewide defeat by voters and several legislative attempts.

Rep. Randy Boyd, R-Mantachie, authored a bill that would amend the constitution to define a fertilized egg as a person with full rights under the law. The bill has been referred to Judiciary B House Committee.

On the anniversary of Roe v. Wade, Jan. 22, Gov. Bryant reiterated his determination to end abortion in the state.

“As we reflect on this dark day in American history, I think of the more than 57 million children who have been killed by abortion since this terrible court decision. These children’s lives were cut tragically short, and it saddens me to know that still more fall victim every day. Rest assured that I am as committed as ever to ending abortion in Mississippi,” Bryant said in a release.

Sen. Chris McDaniel, R-Laurel, also introduced a bill prohibiting abortion based on the gender or race of the fetus.

Gov. Bryant, who has been vocal about protecting the state's border from illegal immigration, also didn't mention immigration during his State of the State address, even though he joined a lawsuit against President Barack Obama's executive order, which prevented the deportation of children whose parents brought them here illegally, as well as their parents.

But immigrant-rights advocates are taking the fight to lawmakers. Hours before Bryant's Jan. 21 speech, the Mississippi Immigrant Rights Alliance rallied in support of a bill, House Bill 196, which would grant in-state tuition to undocumented students. State Rep. Reecy Dickson, D-Macon, and state Sen. Hillman Frazier, D-Jackson, are the sponsors of the legislation.

State Rep. Jim Evans, D-Jackson, applauded young immigrant students in Mississippi for pursuing a college education despite the lack of tuition equity. "If you are denying justice, you are a terrorist," Evans said, referencing the tuition bill.

Immigrant supporters have filed similar bills in the past, but they gained little traction in a Capitol where lawmakers routinely use anti-immigrant rhetoric in their campaigns for re-election.

McDaniel also introduced a bill that would "provide for conditional release of an offender to U.S. Immigration and Customs Enforcement in certain circumstances."

The measure, Senate Bill 2719, would allow for local law enforcement to turn undocumented people who are incarcerated over to federal immigration officials. Similar bills have been unsuccessful in the past.

Correction: A previous version of this story stated that North Dakota mandates a 72-hour waiting period for women seeking abortion. It is actually South Dakota. We apologize for this error.