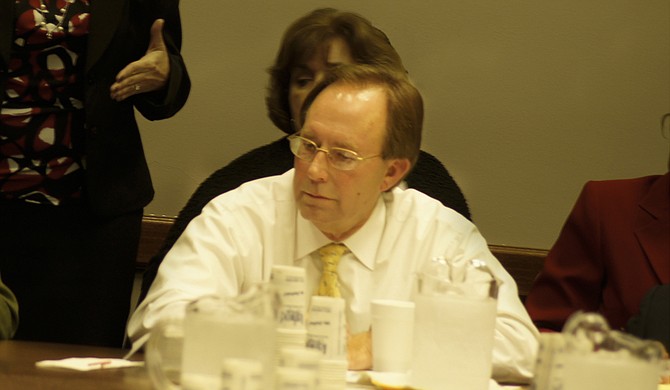 Rep. John Moore, R-Brandon, says he is not trying to block school-district personnel's freedom of speech with his new controversial bill. Photo by R. L. Nave.

School-district personnel need to politicize on their own time, rather than during the performance of their official school-related duties, Rep. John Moore, R-Brandon, told the Jackson Free Press today, adding that they are often used like a "cheap rug" for political purposes. The House Education Committee chairman dropped a bill this month in response to the Initiative 42 campaign last fall to force state legislators to follow the law and fully fund the Mississippi Adequate Education Program.

House Bill 49, if passed, would penalize "school board members, superintendents, administrators, officers or employees" for a gamut of political activity, including disseminating political information in support or opposition of political activities or parties. The law would also forbid them from using school district resources, like phones or computers, in order to advance any particular political agenda while they're on the job. Offenders would face a misdemeanor charge and a fine of up to $10,000.

Jan Richardson, the 2016 Parent of the Year for Madison County Schools, is among a growing chorus of Mississippians who are outraged by the bill to criminalize political activity by public-school personnel.

"The idea that an elected official would write and sign their name to HB 49 is stunning, as it goes against what our country is founded on," she told the Jackson Free Press today. "Our lawmakers need to be asking for more input from the stakeholders like teachers, superintendents, school-board members, parents and students. I support these stakeholders and their right to have a voice in government."

Moore said he authored the bill in response to complaints that district administrators, active in political campaigns and activities, would go so far as to coerce educators into calling their legislators during school hours in order to affect political outcomes. Moore says he has "no problem" with any individual being politically active, but that it's inappropriate during their performance as school-district personnel.

"It was really rampant during the Initiative 42 process, but it's not like it's a new problem," Moore said in a phone interview today. "I introduced a similar bill last year, and it was made out by some that don't want that (political) activity to stop that we are trying to keep teachers from being involved in politics, but teachers are specifically exempted from this bill." Moore says teachers still shouldn't be using classroom time in order to participate in political activities, however.

"Anything that disrupts that teacher's ability to teach is not good, especially if it's something political. This is a district situation, where the district needs to communicate with teachers," Moore said.

The bill's language, however, currently contains no exemption for teachers and includes "employees" in the list of personnel it would affect.

House Bill 49 would require school-district personnel to remain politically neutral in the performance of their duties—even in the face of controversial legislation, like the failed Initiative 42 measure, which affected school districts directly by determining their level of funding.

Regarding Initiative 42, Moore said groups with hidden agendas send skewed information regarding legislation to teachers' school emails in order to rile them up—like the Mississippi Association of Educators, whom he says doesn't give its members the truth "90 percent of the time" and that Initiative 42 held "not one benefit" for its members.

"All of that (Initiative 42) argument put teachers into a panic mode by people who used them like a cheap rug. If that bill had passed, it would have technically gutted the classrooms. That money would have gone to the districts to do as they want to, instead of the teacher receiving supply money and things that they need in the classroom."

Joyce Helmick, president of Mississippi Association of Educators, responded to Moore this morning, bringing the focus back to public-school children.

"Students are at the center of everything we do and everything we value," Helmick said. "As educators, grandparents and parents, we are asking legislators to keep their promise to provide the state's fair share of funding that our students require for their education regardless of their background or zip code."

Moore said teachers should be getting legislative information from the Mississippi Department of Education, but MDE emailed superintendents last fall warning them not to have pro-42 information on their websites. The state auditor's office said the department could tell people what Initiative 42 was, but could not advocate for or against it.

The legislation only would apply to K-12 personnel in the state, not higher education. Last fall, controversy erupted after Jesse Smith, the president of Jones County Junior College emailed community-college presidents from his school account asking them to join him to "battle the passing of Ballot Initiative 42."