What Gov. Bryant Left Out of His SOTS | Jackson Free Press | Jackson, MS

What Gov. Bryant Left Out of His SOTS 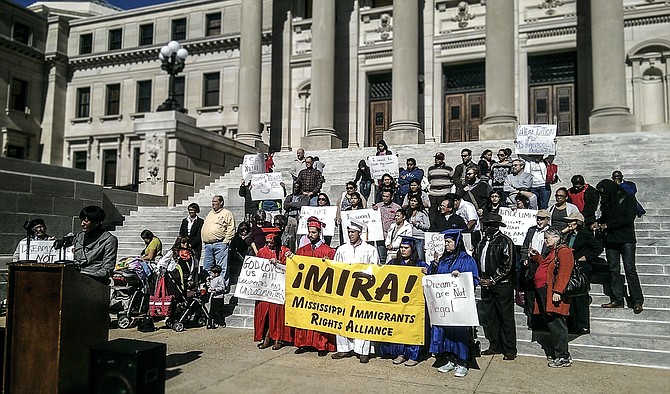 Hours before Bryant's speech, the Mississippi Immigrant Rights Alliance rallied in support of a bill that would grant in-state tuition to undocumented students. Photo by R.L. Nave.

In his fourth State of the State address, Gov. Phil Bryant reiterated much of the agenda he already laid out in his budget recommendation, but the subjects the first-term governor failed to discuss in detail provide a window into Bryant's strategy for winning a second term in November.

Bryant asked legislators to move $50 million into a workforce-training fund; to approve scholarships for special-needs students to attend the school of their parents' choice, including private schools; and to approve his proposed tax cut for low- to moderate-income earners.

"I will ask you to give a raise to the people who need it most: the working people of Mississippi," Bryant said, and legislators responded with tepid applause.

Bryant steered noticeably clear of wedge issues, though. Bryant, who has been vocal about protecting the state's border from what he calls illegal immigration, didn't mention immigration even though he joined a lawsuit against President Barack Obama's executive order on it.

Meanwhile, immigrant-rights advocates are taking the fight to lawmakers. Hours before Bryant's speech, the Mississippi Immigrant Rights Alliance rallied in support of a bill that would grant in-state tuition to undocumented students. State Rep. Reecy Dixon, D-Macon, and state Sen. Hillman Frazier are the sponsors of the legislation.

State Rep. Jim Evans, D-Jackson, applauded young immigrant students in Mississippi for pursuing a college education despite the lack of tuition equity. Evans called it a "Marine mentality," of improvisation in the face of challenges.

Similar bills have been filed in the past but gained little traction. In his remarks on education, Bryant focused on his so-called third-grade gate bill that passed last year and touted modest increases for the Mississippi Adequate Education Program, a formula for education and his executive budget recommendation. However, the governor did not weigh in on Initiative 42, a state referendum that would require the Legislature to adequately fund education, or the controversial alternative amendment that his fellow Republicans recently passed amid the session's first major legislative fight.

Bryant mostly centered his speech on bread-and-butter economic issues. Mississippi has not reached its full potential, but the state is in its best financial condition in recent history, he said.

"We are not yet where we need to be to move to a new level, but we are moving ahead and should not be timid about recognizing the good things in Mississippi," Bryant told legislators, statewide elected officials and judges in a packed House chamber in the state Capitol. "Others will certainly revel in the bad. But as for me, I am proud of my Mississippi."