Uber May Leave Under New Regs 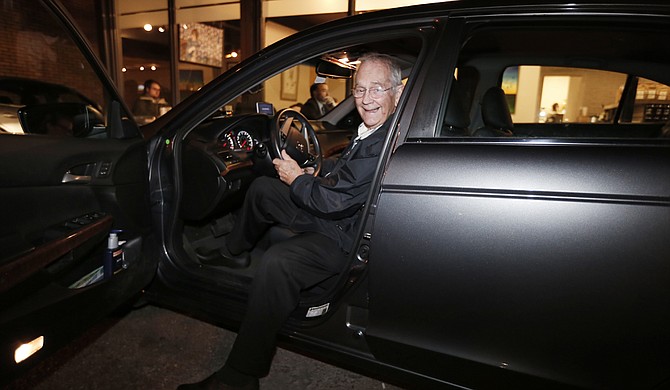 Jack McDaniel, an Uber driver in Jackson, averages 40 to 50 rides weekly and makes more than $500 a week. Photo by Imani Khayyam.

Jack McDaniel took his initial drive as an Uber partner on Valentine's Day 2015. His first two clients were two couples who both said they wanted to do the responsible thing and not risk their own lives or the lives of other motorists by drinking and driving. Those couples solidified McDaniel's conviction to keep driving for Uber, which he says combines his interest in meeting new people and serving others.

McDaniel, 81, has tried to retire several times, but says he was a total failure at it. The former social worker turned stockbroker and insurance agent found out about Uber last year when the company announced its move into Jackson. McDaniel likes that he can work when he wants to—especially on Friday and Saturday nights when cabs are needed most.

Uber has been operating in Jackson for a just under a year, but the company said the prospects of continuing to do business in the capital city are bleak if the Jackson City Council passes regulations on transportation network companies like Uber.

On Nov. 30, the city council's Rules Committee unanimously passed an ordinance, which will now head to the full council, requiring transportation network services, such as Uber, to pay a $5,000 registration fee as well as a $2,500 annual fee. The ordinance is scheduled for a full vote at the Dec. 15 council meeting.

The ordinance also regulates transportation network companies beyond fees. The ordinance requires companies to go through an application process; report driver "requirements" including age, physical examinations and background checks; and set insurance standards. The City would maintain the right to revoke a permit or suspend drivers. Taxicab companies are authorized under a similar ordinance with the City of Jackson.

Ward 2 Councilman Melvin Priester Jr. proposed the ordinance at the Nov. 30 Rules Committee meeting, and it will require transportation network companies and their drivers both to be approved by the city before they operate.

Uber, which uses a phone app that works like a personal taxi service, has paid these fees in other markets. But Uber doesn't like other parts of the ordinance, according to a spokesperson, although she declined to outline specific concerns.

"The regulations proposed by (the Jackson) City Council do not reflect the ride-sharing business model, and if passed, we may no longer be able to operate in Jackson," an Uber spokesperson said in an emailed statement to the Jackson Free Press.

If Uber leaves Jackson, its drivers, who work as independent contractors, not employees, would be out of work.

On the other hand, local cab companies say Uber is hitting their employees in the pocketbook. These companies, which must pay fees to the City and the airport as well as vehicle and employee insurance, have called for oversight of Uber and other network transportation companies to level the playing field in the market.

Tyra Dean, owner of Jackson-based Deluxe Cab Co., said the current market is "economically unfair" because of the fees companies such as hers pay that Uber does not, such as the $250 annual certificate of public necessity and convenience fee. Dean said the proposed ordinance is a good start, although she disagrees with the committee's decision to strike out certain requirements.   The Works Committee voted 3-1 to cut a part of the ordinance that would have required all transportation network company drivers to go to a designated inspection station annually. Instead, the ordinance requires drivers to have an annual mechanical inspection of their vehicles at a professional repair shop, and it requires the companies to re-certify and inspect their individual vehicles on an annual basis.

Uber drivers don't carry commercial coverage; when they apply to Uber, they're required to present proof of personal vehicle insurance that meets the minimum standard for the state where they operate. Uber also has a blanket insurance policy that covers every Uber ride-sharing trip in the U.S. up to $1 million that kicks in before the personal auto coverage of the driver, according to a statement from an Uber spokesperson.

The company's rates are more or less standardized—except when "surge" pricing occurs. A ride costs a minimum of $2.50, and the per-mile rate is around $1.85 depending on traffic and demand, McDaniel said. His riders tells McDaniel that Uber rides are more affordable than cab-company rates. Current cab-company rates are close to $3 per mile—but the city sets those rates.

Cab companies and drivers must pay additional money to pick up at the airport, too—an area that could become even more competitive if the ordinance passes.

The current policy at the Jackson-Evers International Airport allows all transportation network companies, including Uber, to drop off passengers. However, network transportation companies must pay a $100 annual fee and drivers pay a $40 monthly fee to pick people up at the airport. Currently, Uber drivers are barred from picking up passengers at the airport; however, if the ordinance passes, this would change.

In a media advisory issued Dec. 4, the airport said it will update its policy if the ordinance passes to allow Uber and other ground-transport services to operate, but in order to keep fees "equitable with local taxi services," the airport will charge an access fee for entrance to its grounds with a so-called geo-fence, pending approval from the airport's board of commissioners.

Perry Miller, chief operating officer at the airport, could not be reached for a phone interview by press time, but said in an emailed statement that the geo-fence plan, pending board of commissioners' approval, "enables JMAA (Jackson Municipal Airport Authority) to track TNC (transportation network company) activity electrically once an operator enters the airport's virtual boundary."

At the Nov. 30 meeting, taxi drivers expressed their displeasure with not only Uber but also regulations. Shad Denson, a cab driver at Jackson Taxi, told the Rules Committee he wants to see some deregulation of all cab companies because of the onerous fees and regulations put on drivers.

"Uber is not one company. It's a leasing agency that leases their employees and equipment to do their business and takes a percent," Denson said. "And that's all these (taxi) companies are doing with us."

Denson is not advocating for complete deregulation of the industry. He told the Jackson Free Press that cab drivers need someone to hold them accountable, but he would like to be able to go to the city independently and pay a licensing fee to do business on his own. Denson has worked at four of the five cab companies in Jackson in his 15 years as a taxi driver, and he said that the only power drivers have is to switch cab companies if fees go up. Drivers pay companies week to week, and Denson says this only creates the illusion of freedom and ownership when, in reality, he must pay fees to companies to operate a cab in Jackson legally.

Other drivers feel differently. Robert Brown, a cab driver with City-Cab, told the committee that he thinks the cab industry in Jackson is declining and sees no need for new companies like Uber to come into the market. Brown also pointed out the city's need for taxicab services, not Uber, because of socioeconomic conditions that limit transportation for many people.

Brown was referring to Uber's cash-free payment system. App users must register a credit or debit card when they sign up for the app, so once they order a ride, the payment is processed by the end of the trip. Uber drivers are not allowed to take cash, which makes it difficult for riders who don't have the app on a smartphone or do not have a credit card to use Uber. Uber riders can tip with their app at the end of their ride as well as review their driver's performance.

Jackson's ordinance, even if it passes, could be moot if Uber successfully lobbies lawmakers in the upcoming session for statewide legislation that is friendly to transportation network companies. There are four registered lobbyists for the company listed on the Secretary of State's Office.

In the meantime, Uber drivers like McDaniel see Uber as the wave of the future for cab companies and wants the market to be a free enterprise. "In five to 10 years, we're not going to recognize the cab industry as it exists today," McDaniel said.

Dean, the cab-company owner, does not necessarily disagree. However, she adds a caveat: "Competition is competition. Just like any market there's give and take—just level the playing field."