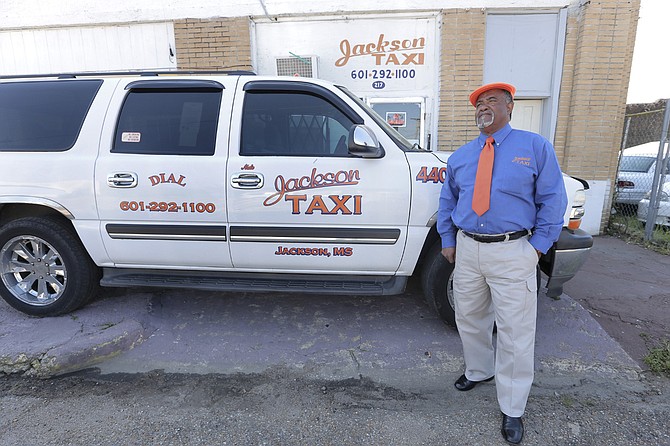 Nate Johnson, a 40-year taxi driver and manager at Jackson Taxi, said that many people don’t know what taxi drivers face here. “They just think that we are charging too much, which really we are not,” he said. Photo by Imani Khayyam.

JACKSON — Nate Johnson estimates that it costs him about $25,000 a year to operate as a taxicab driver in Jackson, even before he has made a single run for fares.

The list of regulations he faces is long, including multiple forms of licensure through the City of Jackson, the airport and the State of Mississippi. Johnson is OK with that, though, as long as new entrants into the market, such as Uber, have to follow the same rules.

Johnson, a 40-year taxi driver and manager at Jackson Taxi, said that many people don't know what taxi drivers face here. "They just think that we are charging too much, which really we are not," he said in a March 18 phone interview.

"They don't have to go under the same rules that we are," Johnson said of Uber, adding that all the licensing and fees come out of the driver's own pocket. "That don't apply to (Uber). And mind you, all this costs money. We have to pay for this ourselves. There's just so much we have to go through. But we ain't complaining about that.

"Our complaint is, other people coming in, picking up on our business, and they don't have to be regulated like we do," Johnson added.

An ordinance is working its way through the potentially contentious road to passage before the Jackson City Council, authored by Council President Melvin Priester Jr., of Ward 2. He wants to re-evaluate the industry in light of policies Uber forced the city to address head-on.

"Right now, what we are doing is revisiting our taxi ordinance to potentially change our requirements for taxis in light of what we have done with Uber," Priester said in a March 18 phone interview.

"Now we are going to revisit our taxi ordinance to see whether or not it makes sense to change the way we regulate taxis in the city," Priester said.

In the draft of the ordinance Priester provided to the Jackson Free Press, the "Certificate for Service" requires taxi drivers to have a clean record, to be at least 19 years old, and to be able to provide sufficient proof of citizenship or authorization to work. The draft also requires that taxi drivers provide proof of a primary automobile liability insurance with limits not less than $1,000,000 for "bodily injury or property damage per accident" to the license and permit division of the Jackson Police Department.

Under the draft ordinance, the Transportation Permit and Review Committee will issue licenses, hear appeals and represent the interests of the consumer.

Priester, who sent the draft to the Planning Committee to consider and present before the public for input, said he anticipates the draft to undergo changes, perhaps significantly, before council passes it. "Maybe the council will decide to keep some of these requirements, maybe not," Priester said. "I am not wedded to any of these changes."

The taxicab drivers' concerns aren't just over Uber. Drivers who have attempted to break into the market have problems with regulations currently in place. Two of them recently filed a lawsuit against the City of Jackson for allegedly permitting a taxicab licensing system that the complaint states is "irrational" and "anticompetitive." The plaintiffs, John Davis and Shad Denson, say the rules, as they stand, leave little room for companies to enter the market.

"There are a lot of regulations on taxicab companies and drivers in the city of Jackson," Hurst said March 18. "But there are some in particular that really make it difficult for an individual or either a 'mom and pop' to be able to break into the market and to create and run their own taxicab company."

Johnson said Jackson Taxi owns four company cars out of the existing 21 in its fleet. The rest of the cars are run by owner-operators who work in an agreement with the company. That is significant because it is not a situation that would be allowed under the current code for new taxi companies.

Hurst said his goal for the lawsuit is to change the current code. "I am absolutely open to talking with the City to try and work out an agreement," Hurst said. He said he's encouraged by the draft ordinance that Council President Melvin Priester Jr., of Ward 2, introduced several meetings ago which is still under discussion. The new ordinances are simpler, not requiring a minimum number of cars to operate or the mandated 24/7 office.

"I think that's a really good draft, a really good ordinance, and I am looking forward to actually sitting down with the city, talking through what our clients have alleged in our complaint and working out a resolution," he said. "I don't want to drag this out. I want to get something that's good for not just for my clients but for consumers in Jackson."

Hurst said his clients hope to promote more driver-owned businesses, which will benefit the city as a whole.

"The endgame is that if you have more people get into the taxicab business, just like what we have seen with Uber, you have more competition which equals more cabs, more options, lower prices because people are actually competing, and better service because not only do people compete on prices but they compete on service as well," Hurst said.