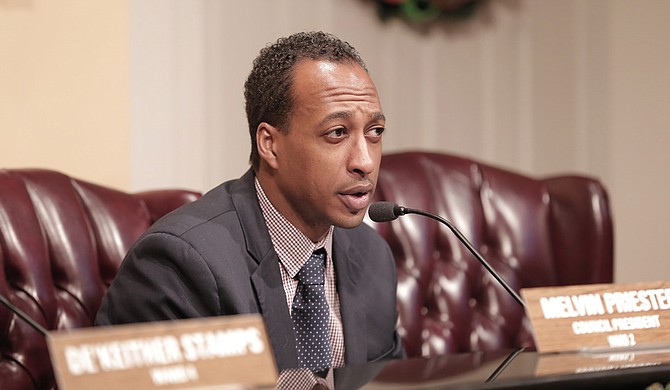 When it comes to regulating Uber—and other transportation network companies that might follow—the Jackson City Council is walking a fine line.

"I have drafted a set of proposals that meet the safety things that I think are most important and don't result in us being the city council that chased Uber out of town," City Council President Melvin Priester Jr. told council colleagues Monday.

Priester presented a new round of proposals to the city council's Rules Committee on Jan. 25.

In summer 2015, the city council started drafting regulations for companies like Uber, which calls itself a ride-sharing mobile application, to address concerns of traditional cab companies that said lack of regulations put their businesses at a competitive disadvantage. The company first came to Jackson in late 2014.

The initial ordinance would have required companies to go through an application process; report driver "requirements" including age, physical examinations and background checks; and set insurance standards. The City would maintain the right to revoke a permit or suspend drivers.

That ordinance also would have required the companies to pay a $5,000 registration fee as well as a $2,500 annual fee.

Priester's amended version of the ordinance keeps the registration fee (Priester said Mobile, Ala., levies the same fee against Uber), but removes the provision to require the companies to submit driver rosters to the city. Under the plan, the transportation-network companies would apply to the City for a license. That license would require the companies to perform background checks on its drivers; the City would then perform periodic audits of the companies' records.

Tyra Dean, who owns Jackson-based Deluxe Cab Co. and represents taxi companies in town, said she opposed many of the proposed changes, including not requiring a roster of drivers. "If something happens, without a roster, how will we know who picked up and dropped off?" she asked committee members.

Priester stressed that his goal was to make the playing field even for both cabs and Uber, including at the Jackson airport, where companies like Uber are not allowed to pick passengers up. The draft ordinance would allow Uber to pick up and drop off at the airport and officials there have said they were also open to relaxing some of its restrictions if the city council passes new regulations.

"Since Uber makes such a big deal out of the fact that this is a private car—it's not a taxi—then let's make them follow the rules for private cars. If a taxi gets to be in a certain place, and Uber doesn't want to be treated like taxis, then Uber shouldn't get one of the few benefits that taxi drivers get," Priester said.

The Rules Committee passed the ordinance on to the full council for consideration at the Feb. 9 meeting.