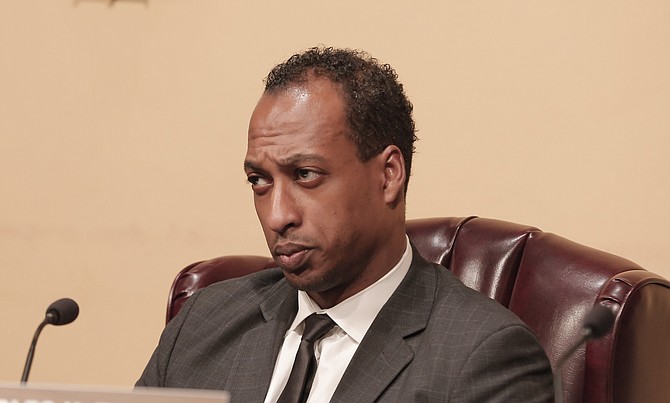 Council President Melvin Priester Jr., of Ward 2, is proposing an ordinance outlining regulation for taxi companies like Uber, which may not pass before similar bills by both sides of the state Legislature. Photo by Imani Khayyam.

Two taxi drivers are suing the City of Jackson over regulations that they say restrict their business, just as city leaders and state legislators work to push through new rules to govern "transport network companies" like Uber to Mississippi. The state laws would preempt local ordinances designed, in part, to prevent taxicabs and other car services from adopting discriminatory practices.

Through a press release on Wednesday, former GOP candidate for state attorney general, Mike Hurst, announced he is representing John Davis and Shad Denson who "wish to start their own taxicab companies but are prevented by Jackson's regulatory scheme, which limits competition with established taxicab companies."

This is not the first time Shad Denson has complained about Jackson's regulations surrounding taxicabs. At a Nov. 30, 2015, meeting, Denson asked the Jackson Rules Committee of the City Council to reduce the level of regulation placed upon taxi drivers. The rules did not pass in that meeting.

Council President Melvin Priester Jr., of Ward 2, declined to comment late yesterday on the pending legal matter. But he did say that the ordinance he is currently working on only focuses on the city's ability to audit a company's records and to ensure that the drivers are not practicing any form of discrimination.

"This is a way for the City of Jackson to get data about trips to see whether or not these companies are being fair to all," Priester said during a phone interview Wednesday night.

Priester said he was concerned about certain drivers not picking up customers based on their economic or racial background. At the moment, he explained, under bills pending in the Legislature, the Department of Insurance would be the only body with the ability to look through the records of a company that operates within the city to ensure that it could not develop habitual discriminatory practices. And as for the state bills, the two sides of the Legislature passed their own versions on March 1, sent each to the other and will introduce them soon for consideration in the House and Senate.

All the drivers that operate within the city must have a local, state-issued license, Priester said. The ordinance he is crafting would require this, although he said that it is not in the legislation proposed on the state level. This is not only an issue for regulatory purposes, but also to protect locals from potential drawn-out litigation from accidents that involve parties from outside the state.

"We want there to be local or state-based driver's licenses," Priester said.

This tension between local law and state legislation, Priester explained, is a reflection of how Uber has worked in other states. The company began operating in Mississippi in three locations, and out of those three, Jackson was the only one that allowed the company to operate. When it faced resistance, Uber pushed for legislation through House Bill 1381 and Senate Bill 2815 to allow for the company to operate freely.