Steve Hendrix: Lost in the Art 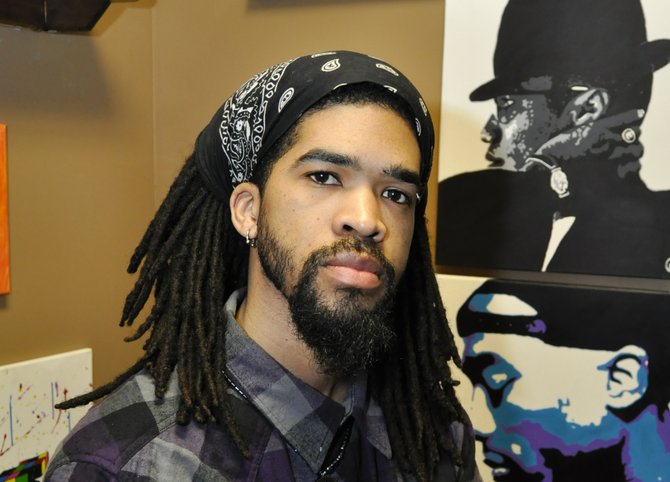 Steve Hendrix's long, slender hands might indicate that he has psychic abilities, if you believe in that sort of thing. At the very least, palm readers would say they're a sign of an active mind in search of knowledge. His hands are one of the first things you'll notice about Hendrix—that is, if his shoulder-length dreadlocks don't register as unusual.

Hendrix, 26, a tattoo and visual artist, says his passions center on his 7-year-old son, Dante. Hendrix is a single father, and several of Dante's Avengers action figures (along with Token Black from "South Park") occupy a shelf in his workspace at Hardroc Tattoo in Brandon—where children aren't allowed. His latest tat, on his left inner arm, is Spiderman.

"He's my son's favorite," Hendrix says. "He jumped for joy for that."

Hendrix, whose real last name is Smith, has worked as a professional tattoo artist for about a year since completing an apprenticeship, but his interest in art goes back to his days at Canton High School. He was always sketching back then, he says, and later tried his hand at graphic design.

"I hated painting when I was younger," Hendrix says. "I just never  understood it."

He kept at it, though, and now considers painting his therapy. "I get lost in it," he says.

Dante frequently watches his daddy work, and Hendrix was thrilled when his son told him he wants to be an artist "just like you," when he grows up. "Don't let anyone tell you (that) you can't do it," Hendrix told him.

Hendrix began painting in earnest when he saw the work of Atlanta-based Miya Bailey several years ago. Bailey is also a tattoo and visual artist, and his life shows Hendrix that he can make it, too, doing what he loves.

"His work is amazing," Hendrix says of Bailey. "(And) he's a real down-to-earth, humble guy."

Most of Hendrix's canvasses are stark, highly graphic portraits based on photographs of iconic African Americans he admires, rendered in acrylic paint. His portrayal of Malcolm X in black, white and shades of gray has a brooding quality. Black, cool blue and purple are the only colors in his painting of Tupac Shakur, orange is the color of choice for his image of Ray Charles, the warm color accentuating Charles' open, welcoming smile. Michael Jackson's image floats on an appropriately frenetic field of yellows.

Comics also feature in Hendrix's art—and on his skin. He sports several tats of the Joker from Batman comics. His first tat was Superman's "S" shield, and Spidey's web covers the back of his left hand. Hendrix inked several of his own tattoos as part of his training. His mom's name,  Sherell, is on the inside of his right wrist, a sign of his admiration for her strength and constant inspiration.

"She helps me a lot with life," Hendrix says. "I can go to her with anything."

College hasn't been in the cards for Hendrix, who was born in Peoria, Ill., but he's a big believer in gaining knowledge for personal growth. Hendrix hopes to take his art overseas, eventually, but for now he's a voracious reader who's constantly seeking to better himself. Right now, he's reading the classic "Think and Grow Rich" by Napoleon Hill, first published in 1937.

Hendrix sums up his life's philosophy this way: "You can't let your failures define you. You have to let them teach you. ... Take that negative energy, that anger, and (transform it with) your art."