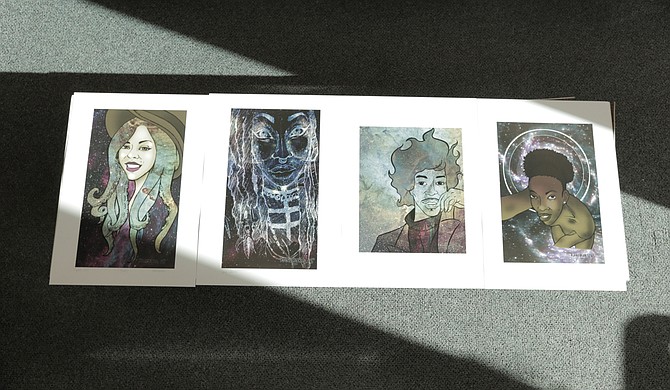 Jackson mixed-media artist Justin Ransburg was recently featured in the sixth installment of Priced to Move. Photo by Imani Khayyam.

When Justin Ransburg was only 8 years old, his older brother, Maurice Williams, gave him a task. Williams was an artist, and Ransburg wanted to create his own work, too. Williams told him to draw something that he liked, and afterward, he gave him his first critique. Ever since then, Ransburg has worked to create art that keeps life interesting and tests boundaries of mixed media.

"I started out as doing it (art) just because I loved it, which is something I encourage everybody to do," Ransburg says. "If you really love something, just do it, even if no one wants to pay you."

Ransburg, a Jackson native who attended Callaway High School, graduated from Texas Southern University in 2012 with a bachelor's degree in fine arts with emphasis on painting. Most of his artwork combines illustrations and painting, as well as graphic design and photography. Ransburg says he dabbles in a bit of everything, including different mediums like charcoal, ink, wood or markers. He uses accents from each art style to complement each other, like portraits combining hand-drawn images such as a woman with octopus tentacles for hair with graphics such as starry nights.

The artist also works with wood and household objects, including Altoids tins, sewing paper and other items that add texture and interest. Some of his artwork has subtle elements, such as binary code with messages inserted into paintings.

"For me, (it's done) when I know that there's nothing left that I can add to it, there's nothing else that I can say, because one trick of making art (is) ... just knowing when to stop," he says. Mixed-media artist Najee Dorsey gave him advice, Ransburg says: "'You don't have to put everything you know into a piece.'"

The artist's inspirations include comic books such as "Saga" and his boyhood favorites, "Spider-Man" and "Dragon Ball Z"; surrealist painter Salvador Dali and his former art professor Robert Pruitt; and local artists including John Jennings, Mitch Davis and Ian Hanson.

Hanson and Cody Cox recently hosted the sixth installment of Priced to Move, an art show where all pieces were under $100. Ransburg's art was featured alongside other locals at the event. Currently, he has pieces hanging in High Noon Cafe in Fondren and is working to get his work out to other local places. In the future, he plans to work on more murals and get into videography.

"To me, in general, art is a way of coping and understanding daily life and giving other people insight into the way that you see life," he says. "Sometimes, saying things, you can get them out in a certain way, but some of the words, because of (their) double meanings ... they may not have the same impact, whereas visuals, you look at it and go, 'Oh, I know exactly what this is about.'"