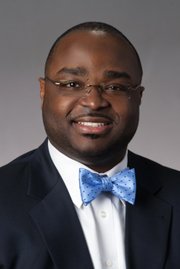 Potter attended Jackson public schools, graduating from Callaway High School in 1991. He was involved in student government in high school and found himself spending summers on Jackson State's campus.

"I was student body president (at Callaway) and participated in a number of summer academic-enrichment programs at Jackson State," Potter says.

It was at Callaway that Potter developed his love for English literature, under the guidance of teachers Barbara Stevens and Rose Wanley.

From Stillman, he enrolled at the University of Missouri at Columbia, where he acquired his master's and doctoral degrees in English.

"I focus on 19th- and 20th-century American and African American literature, and I look particularly at African American authors and their study of race and race relations, specifically how it intersects with class, socioeconomic status, gender, sexuality ... and just identity," Potter says.

Potter says the authors who write about this intersection best are Wallace Thurman, Toni Morrison and Langston Hughes.

As a native and graduate of an area school, Dr. Potter says that he was naturally drawn back into Jackson.

"The position of dean of the College of Liberal Arts provided an opportunity for me to give back to the community that gave so much to me," Potter says.

Potter, 39, says that he probably had a different experience growing up in Jackson than others in his cohort.

"I had a fairly sheltered life," he says. "My father pushed academics, and all of my free time was devoted to improving myself and advancing myself and leadership development."

As a dean as well as an English professor, Dr. Potter has a broad view of his role at Jackson State.

"I wake up every day hoping to make life better for someone I meet, whether that's a student, a person in the community, colleague or someone I've met in years past," he says.