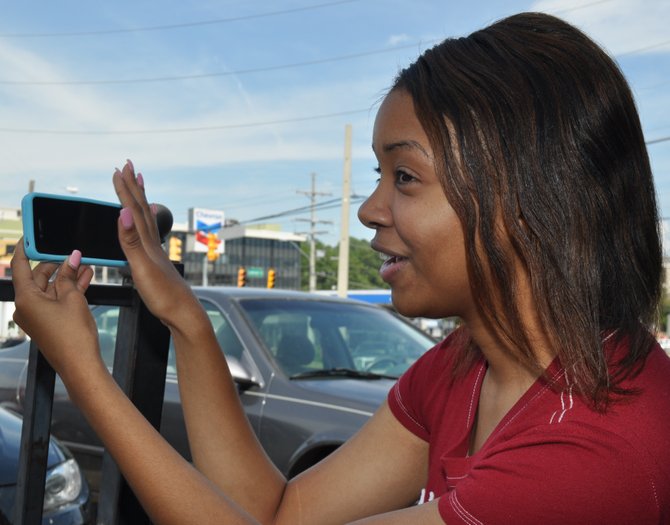 Sheena Allen created her first app because she needed it to keep up with her checkbook. Now, she doesn’t know how to stop. Photo by Trip Burns.

Terry native Sheena Allen, 23, started making iPhone apps almost a year ago after graduating from the University of Southern Mississippi. Allen makes apps that can be downloaded to the iPhone, iPod touch and iPad.

Allen decided to start making apps after making a purchase at a local store. She was walking out of the store with her receipt and thought to herself, “It would be so cool to have an app to keep up with

And so she created her first app, PAMO (picture and money organizer). It’s a simple finance app that acts as a digital checkbook. Since then, she’s released three other apps.

“So you could be shaking your own hand or high-fiving yourself (in the photo),” she explains. “You can take a double picture of yourself.”

At its highest ranking on August 15, Dubblen was the 115th most popular download in the photo and video category in the App store, which only ranks 6,900 apps out of the total of 700,000 that are available for download.

“So you pretty much have a 1 percent chance of having your app ranked,”

Allen released her second most popular app, Words on Pics, in November of last year. Words on Pics allows the user to enhance iPhone photos with text.

“You can add photo captions, thought bubbles, speech bubbles, pretty much just have fun with your photos,” she says.

Allen released her most recent app, TwtBooth, last July. TwtBooth takes the pictures that you’ve tweeted from various photo-sharing programs and consolidates them into one program.

“I pretty much made an app where instead of having to scroll through people’s timelines to see photos they’ve tweeted, or go to TwitPic here, go to Instagram there. TwtBooth just shows all the photos that are tweeted no matter what service you (originally) used to tweet them,” Allen says.

Allen has introduced both free and for-a-fee versions of her apps. The latter are available for download for 99 cents, with the exception of Dubblen+, at $1.99. Allen turns a profit mainly through downloads of these apps, although she also makes money through advertisements that pop up on her free apps. Through each download of her for-a-fee apps, she receives 70 percent of the payment, and Apple receives 30 percent.

To date, Allen’s apps have garnered about 75,000 downloads, and she received more than 21,000 in the month of September alone. But she’s not done yet.

“I’m going to do a Words on Pics II,” she says. “Then the next app I’m going to do is going to be called Pic Subject, but I can’t talk too much about that one. It’s a photo/social networking type thing.”

Allen has a couple websites as well. Her most popular is called PartyTell.com, a website that allows users to post events that are going on in their area and make these posts visible to other users. PartyTell is a free site.

“Say if someone from Atlanta is coming to Jackson this weekend, they can actually go to PartyTell, and they can find out about things that are going on in the city,” she explains.

The entrepreneur is also working on three website startups. One is a how-to website called Step Station. Another is Allen Ad, which steers advertisers in the right direction in terms of where they

“A lot of people just advertise because they feel like you’re supposed to advertise, but sometimes they spend money and get no results when they’re advertising. It’s a matchmaker between the perfect place to advertise and what you’re trying to advertise,” she says.

When asked about her interests, she says, “I’m a proud geek. I’m usually that person you call on a Friday night and say, ‘What are you doing? Are you going out?’ And I’m in the office, on the computer. My best friend’s my computer, I guess.”