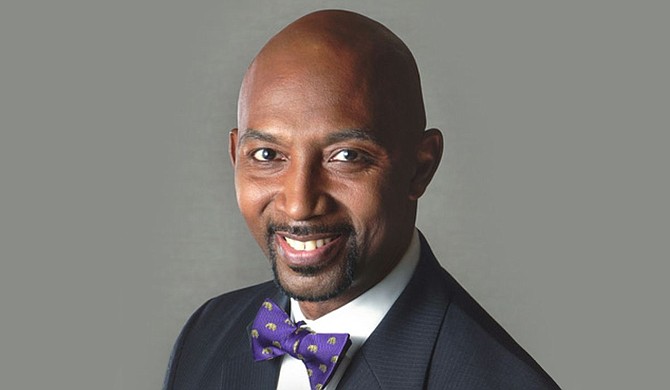 Jackson State University President Thomas Hudson recently appointed Josiah Sampson III as the university's new vice president for Enrollment Management, effective Jan. 18. While in the position, Sampson will manage scholarships and financial aid on behalf of JSU. He also will also lead the charge on strategic enrollment-management planning for the university, as well as the registrar and records services.

Sampson, a JSU alumnus, most recently served as provost and vice president of Academic Affairs at Saint Augustine’s University in Raleigh, N.C., where he was in charge of developing and supervising new programs, increasing faculty and student research, advising and mentoring faculty and students, faculty development, and accreditation,.

Born and raised in Jackson, Sampson graduated from Callaway High School before enrolling at JSU, where he earned his bachelor’s degree in biology. Enrolling there was a simple decision, Sampson says, because the university had long been a staple for his family. His grandmother's house was located on the site of what is now the JSU Student Center, and he was enrolled in an early-childhood education program at JSU during kindergarten. His father, Josiah Sampson Jr., was a professor of music and an orchestra director for the university, while his mother, Woodie Sampson, served as an adjunct professor of sign language. Both his parents also graduated from and even met at JSU, Sampson says.

His teaching career began with the Mississippi Baptist Medical Center’s Medical Technologist program, where he assisted in teaching laboratory techniques to medical-technology students. He also served as a biology instructor at James B. Murrah and Robert M. Callaway High Schools in Jackson. At Callaway, he served as assistant band director for both marching and concert bands.

In 1999, Sampson moved to Nashville, Tenn., where he began teaching biology, chemistry and physical science at Hunters Lane Comprehensive High School. He also served as a math and science teacher, principal-designee and public-relations correspondent for Murphy Alternative School in Nashville.

Sampson formerly held a position as an assistant professor of biological sciences at Elizabeth City State University, where he chaired and worked on the University of North Carolina at Chapel Hill Campus Security Initiative, the Southern Association of Colleges and Schools Commission on Colleges and the National Council for Accreditation of Teacher Education. He also served as chairman of the Joint Council for disciplinary appeals and on the Academic Appeals and Re-entry Committees, the General Studies Advisory Board and the HBCU-UP undergraduate program. Sampson was also an assistant band director and advisor of several student groups at the university.

In 2018, he served as dean of the School of Arts and Sciences at Stillman College in Tuscaloosa, Ala. While there, he also served as the Louis Stokes Alliances for Minority Participation and Harte Honors College director and as co-advisor to several student organizations.

While teaching in Jackson, Sampson has served as a Boy Scouts of America scoutmaster. He has also been a member of the board of trustees for Clark Memorial United Methodist Church in Nashville, where he taught for the couples’ ministry, and has also been chapter president and served on committees with the Omega Psi Phi Fraternity, Inc. At Cornerstone Missionary Baptist Church in Elizabeth City, N.C., he served as a deacon and vice-chair of the Diaconate Ministry.

"It is an honor and a pleasure to be able to come back to JSU and work for my alma mater," Sampson says. "My service at other places has been wonderful, but being able to do so at home is much more meaningful because of that powerful connection I feel through my family and history with this university. I want to be able to have a strong impact on enrollment management here and support all of our students in their successes as they attend our university."

Sampson and his wife, Daphny Sampson, have been married since 2011 and have six children.