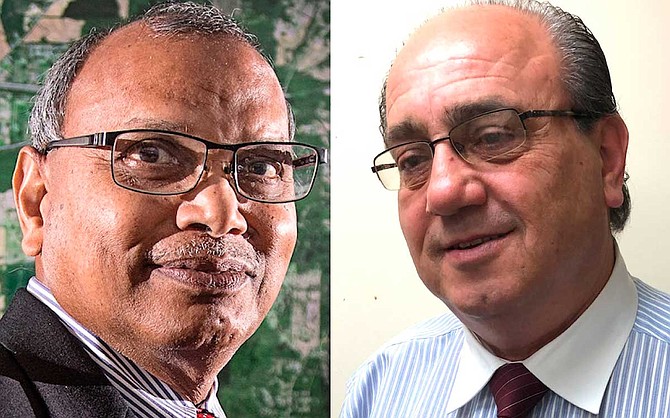 Ramzi Kafoury (right), associate professor in the Department of Biology and director of Sustainability and Technology Systems in CSET, created and directed the project alongside Francis Tuluri (left), a JSU professor in civil and environmental engineering, and several CSET students. Photo courtesy JSU

A group of professors and students at Jackson State University's College of Science, Engineering and Technology recently developed what they call a "Sustainable Irrigation System," an automated system that can determine the right amount of water needed to saturate soil for gardening and agriculture.

Ramzi Kafoury, associate professor in the Department of Biology and director of Sustainability and Technology Systems in CSET, created and directed the project alongside Francis Tuluri, a JSU professor in civil and environmental engineering, and several CSET students.

The SIS device uses solar panels for power and includes sensors and a smartphone app to automatically use water from a rainwater-collecting reservoir, or to activate a sprinkler system using a backup water supply if the reservoir doesn't have enough rainwater.

CSET developed the SIS device as part of a challenge from the American Association for the Advancement of Science, the National Science Foundation and the United Nations' Sustainability Program.

Tuluri says in a release from JSU that the system could eventually be used for gardens, large-scale environmental systems and in developing countries with scarce water supplies. The system has not been commercially deployed yet, the release says.

The University of Southern Mississippi recently named history professor Andrew Haley as its Charles W. Moorman distinguished alumni professor of the humanities for 2019-21.

The Moorman Professorship's namesake was a professor of English at USM who served as the university's vice president for academic affairs in the 1970s. USM awards the professorship every two years to a senior professor in English, history, foreign languages or philosophy.

USM gives award recipients financial support for research in their field of study. Recipients must also present a public lecture by the end of their term as the Moorman Professor, a release from USM says.

Haley has been a member of the USM faculty since 2005 and currently serves as director of the USM Honors College's University Forum. His work at USM involves examining community cookbooks and daily dining and social class in Mississippi, the release says. He also researches Mississippi's culinary heritage through the Mississippi Community Cookbook Project, which he and USM University Libraries professor and curator Jennifer Brannock began in 2014.

For the Community Cookbook Project, Haley and Brannock began collecting Mississippi cookbooks, including ones that churches and community and civic groups published, in order to preserve them. The two collected more than 1,000 cookbooks from across the state, the release says. Haley also uses USM's Culinary Collection, which includes nearly 8,000 cookbooks, to study the role of Mississippi foodways, which refers to the cultural, social and economic practices relating to the production and consumption of food.

During his two years as the Moorman Professor, Haley plans to complete work on the project, the release says. He will also visit remote parts of the state to share stories about Mississippi's culinary traditions and encourage people to donate their unused cookbooks to the Community Cookbook Project.

The courses are open to anyone and cover subjects such as accounting, business, design, health care, language, teacher development, technology and writing, a release from MSU says. The CCE will give participants a certificate of completion for each course.

After the June 12 session, MSU will hold new course sessions at the beginning of each month. Tuition is $115 per student for six-week, instructor-led courses and $135 for self-paced, open enrollment courses. Students can begin open enrollment courses at any time and have three months to complete them, CCE manager Dixie Cartwright told the Jackson Free Press.

For more information about the courses, call 662-325-5002 or visit the ed2go website. For information on the CCE, visit http://ce.extension.msstate.edu.