Professor Everett Neasman looks outside the window of his office at Jackson State University and sees Shakespeare. Fortunately, he doesn't see the bard himself—the playwright has been dead for nearly 400 years—but what he does see outside of his office window is the intersection of drama and "real life," the evolving human story that the legendary Elizabethan playwright drew inspiration from centuries ago. 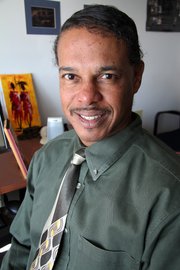 "If what we are doing in class does not apply to what's out of that window, then we are wasting our time," Neasman says.

If it's possible to bring a since of urgency to Renaissance drama, this dramaturge has gone above and beyond the call to duty of the average professor of English literature. Neasman is a distinguished scholar of all things Shakespeare with a list of academic articles and a book to his name. He reviews regional productions of Shakespeare plays and is the founder of JSU's first Shakespeare club, called Lear's Fool.

In the classroom, Neasman employs 21st-century teaching mediums, such as blogs and video media, to get students talking about the parallels between plays they study and the "drama" of the news that they experience every day.

The JSU professor identifies the collective experience as essential to all literary works and sees it as a jumping-off point for increased globalized studies, especially within his own expertise. The 46 year-old native of Miami, Fla., who holds a doctorate from Southern Illinois University, recently had the opportunity to take his knowledge of Renaissance literature abroad to China, spearheading lectures at several universities in Beijing and Shanghai while representing JSU.

Many of his students were English teachers and Shakespearean graduate students who are part of a growing number of teachers in China who use the playwright's works to teach English. In a culture that tends to be cautious of any Western integration—especially in arts and culture—Neasman says China has fully embraced Shakespeare, gravitating toward his stronger female characters (Lady Macbeth, Juliet) and aspects of feudalism that have existed in Eastern and Western civilization.

"The Chinese are crazy about Shakespeare," Neasman says, and he points out that they have adapted many of Shakepeare's most popular plays into Chinese operas that combine traditional elements of Chinese theater with the basic storylines of "King Lear," "Hamlet" and the like.

Neasman says he is always excited when new groups of people or a new culture "discover" Shakespeare—he even has hopes of a Choctaw translation of some of the playwright's shorter works in the near future—but it's obvious that the professor is just as enthused about the invaluable relationships that he has built along the way.

"I don't believe in teaching these plays, or any literature, in a vacuum," Neasman says. "You have to take into consideration the history of your students and use Shakespeare to get back to the real problems of today, whether that be urban infrastructure, politics, war and so on."

Neasman's educational history goes back to Miami. He grew up in a "home that looked like the explosion of an HBCU library," he says.

Though JSU has been his first experience at a historically black college or university, his parents were graduates of Spelman College and Morris Brown College, and he describes his upbringing as one that was "groomed for college success."

Neasman is in the process of gaining tenure at JSU. He seems to be on the right track: he recently received a $5,000 creative research grant from the president of the university, Caroline W. Meyers, that has allowed him to do an extensive empirical study of "Timon of Athens," a project that he is still working on.

And that's usually where you'll find Neasman: in the midst of continuing or starting new research, new productions and new initiatives. Asked what plans he has for the next 20 years, Neasman points at his crowded collection of books. "I want to at least see a row of my shelf with books," he says, but not just any books—his own published works. Neasman sees himself as a "generalist," not unlike the Renaissance minds that he studies, and hopes to embark on writings outside of academia—plays, fiction, biographies—and whatever else that he can find time for.