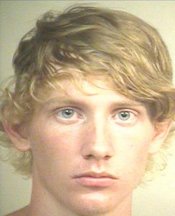 The federal government used the Matthew Shepard and James Byrd Jr. Hate Crimes Prevention Act, passed in Oct., 2009, for the first time Thursday in a case where the defendants actions resulted in a victim's death.

Violation of the act carries a maximum penalty of up to $250,000 and life in prison.

As part of their plea agreements, the three accused waived their rights to appeal or contest their conviction or sentence, to seek attorney's fees, to request a record of the investigation and their right to a jury determination of sentencing. All three were denied parole.

Dedmon pled guilty Wednesday to state murder and hate crime charges in Hinds County Circuit Court for killing Anderson by running him over with his Ford F-250 pickup truck. He was sentenced to two life terms, to be served concurrently.

A prosecutor said Butler and Rice helped corral and assault Anderson before Dedmon ran him over.

Perez said the three were part of a group of "racist thugs, who made sport of attacking African Americans in Jackson."

Dedmon, Butler and Rice, along with other unnamed parties, drove to Jackson, which they referred to as "Jafrica," on multiple occasions between April 1, 2011, and Feb. 15, 2012, with the goal of harassing and assaulting black people, the prosecutor said.

On separate occasions, the three threw beer bottles at African Americans, once striking a man in the back of the head and another in the crotch, and shooting marbles at blacks with a slingshot.

The actions of the men do not represent Mississippi in 2012, U.S. Attorney John Dowdy Jr. said.

"We will not tolerate these kinds of crimes in Mississippi," he said. "We are better than that as a people. Justice will be colorblind."

Perez said the investigation into the murder and separate assaults is ongoing. At least four other co-conspirators, referred to during Thursday's hearing as co-conspirators A,B,C and D, are under investigation for involvement in the crime. There may be others involved in the separate incidents as well.

The Jackson Free Press reported in Sept., 2011, that on Sept. 6, Jackson attorney Winston Thompson III of the Cochran Law Firm along with the Southern Poverty Law Center, based in Montgomery, Ala., filed a wrongful death suit on behalf of Anderson's family, against Dedmon, Rice, Butler, Sarah Graves, Shelbie Richards and William Kirk Montgomery.

"This is a bittersweet day, an important day in the journey of justice," Perez said.

Dedmon, Butler and Rice will be sentenced in U.S. District Court by Judge Carlton Reeves June 8 at 1:30 p.m.