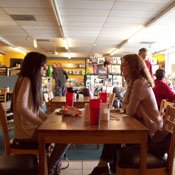 T-Bones is a coffee shop, lunch destination and a congregation point for music lovers in Hattiesburg.

T-Bones Record Shop and Cafe in Hattiesburg may be Mississippi's last operating independent record store, selling both new and used vinyl and CDs.

"It's bittersweet," Harry Crumpler III, one of the owners, said. "I'd love to see a record store come back to Jackson, particularly after Be-Bop closed. While I grew up around Hattiesburg, when I went to Jackson, I went to Be-Bop. T-Bones serves Hattiesburg like Be-Bop served Jackson."

Crumpler, 31, and his father bought T-Bones in 2002. The business started as a record label and store in the late 1990s. Former owner Tim Ramenofsky moved to California after successfully marketing Hattiesburg rapper Afroman. The Crumplers bought the building and transformed the former studio into a "dream come true."

"Every member of our crew is important to the utmost at making sure there's good customer service, that you get a good-tasting sandwich, your coffee tastes right and that you get the music you're looking for," Crumpler said.

"The most important people that help make T-Bone's run on a day-to-day basis are our customers. We wouldn't be here without our awesome patrons keeping us stocked with good folks coming in."

Store manager, Jackson native and overall music guru Mik Davis, 42, has an acute knowledge of regional music, stemming in part from his own musical endeavors over the past 28 years, including touring and recording with his former band, Seven Tongues Spoke.

"I hold on to this romantic notion that we're some of the last vestiges of good, solid consumer customer service," Davis said. "When you come into our record shop, you're dealing with nine people who really want to serve you. Nine times out of 10, we know customers by name, and they know us by name. It's a real testament that we don't wear any nametags."

T-Bone's is also a member of the Coalition of Independent Music Stores, or CIMS, a group of music businesses that have earned a reputation for their contributing to their communities and participating in the music industry. CIMS only recognizes 45 record stores in the nation.

Davis said he is excited about the opportunities T-Bones now has. "With the CIMS designation, we're part of a larger collective, so we've been able to receive more product at a (lower) price and also push the limits of what music stores normally have," he said.

In many ways, T-Bones has become the hub of Hattiesburg's music and culture scene, not only housing the latest music merchandise but also hosting live concerts, comedy shows and poetry readings. Members of the University of Southern Mississippi's Center for Writers frequent the store to perform poetry. Hattiesburg's stand-up group Hub City Comedy has hosted two events at T-Bones since August. The bands Gashcat and Members of Morphine have recently played there, and Blue Mountain is scheduled to perform Jan. 20.

"T-Bones has come a long way in the nine years that we've had it, from rolling with the cafe to expanding the vinyl and now carrying turntables," Crumpler said.