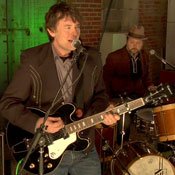 In an old brick warehouse in downtown Hattiesburg, Paul Burch strums roots music on his guitar. Warm light bounces off hardwood floors and his comfy brown jacket as the song picks up. He breaks a guitar string but keeps playing. The cameras of "The Green Couch Sessions" keep rolling.

Authentic moments like this keep the Hattiesburg-produced television show honest. An "Austin City Limits" for Mississippi, the program airs on WDAM, a Raycom Media-owned station and NBC affiliate.

Director Brad Clark, 38, hopes WLBT in Jackson and WLOX in Biloxi, two other Raycom Media TV stations in the state, pick up the show. If that happens, it's possible Louisiana and Alabama stations might pick it up as well. His television crew believes Mississippi Public Broadcasting should also air it.

The concept is simple: Local professionals produce the show about local musicians for a local audience. Co-creator David McRaney, 33, calls it a video version of a college-town alternative newspaper. The idea started when McRaney, WDAM webmaster, wanted to add an online entertainment guide with videos of local bands. They never made it to the website, but the videos were great. McRaney and Clark brainstormed—on a green couch in the WDAM production room.

Clark, who makes commercials for WDAM, has been in several bands. In the 1990s, he was in Seven Tongues Spoke.

"The music scene back then was sort of tucked away from the light of day," Clark says. "Now the music scene feels much larger, and with so many great bands in Jackson and all the incredible music happening in Oxford, there's now a feeling that original music in Mississippi has found its place. And there's a much larger audience ready and waiting to hear what's next."

"We're going to release our third album, ‘Liberty Road,' in the near future," he says. "That was the most successful band I've been in to date. We got to play CMJ (College Music Journal's annual shindig) in New York and SXSW (South by Southwest) in Austin, record three albums and open for Wilco when they played Meridian a few years ago."

Clark and McRaney had to sell their bosses on the television show idea. They got the go-ahead to tape 10 shows. "I ‘Mad Men'-ed it up," McRaney says. "The idea was cool, but quality sold it."

One night at The Thirsty Hippo, he bumped into Ryan Royals, an audio engineer, and asked if he could bring his equipment to the shoots. Royals, 34, who owns Rec Room Recording and heads up Skeeter Hawk Records, loved the idea. Clark brags about Royals, saying some of his recordings actually sound better than some of the bands' professional recordings.

Clark also brought in Mik Davis, who had played in Seven Tongues Spoke, too. Davis has a reputation as a Mississippi-music aficionado. He laughs about this title as he sits in T-Bone Records, where he works amid vintage vinyl and coffeehouse aromas. He also writes music reviews for various publications and was a familiar voice on WUSM radio for years. His role with "The Green Couch Sessions" is interviewing artists. He gets them to talk, yet is never seen or heard on camera.

The criteria for a band to get on the show is as simple and as straightforward as the show's stripped-down packaging.

"They have to be from here or play here," Clark says. "And no cover songs."

The first season ends Aug. 29. Clark doesn't know yet if a second season will air. At least 50 bands have called him, though, asking to be on. "We want to expose what's already here, then bring in more bands, venues and artists," Clark says.