As If We Lost the Saints | Jackson Free Press | Jackson, MS

As If We Lost the Saints 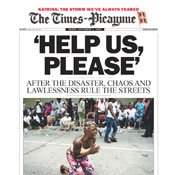 New Orleans' only daily newspaper is cutting back to three days a week.

A tornado touched down in the New Orleans suburb of Arabi the evening of May 23. It was a busy Wednesday night in The Times-Picayune newsroom. The paper's website, NOLA.com, posted reports of heavy wind damage in Arabi, then later the news of a possible tornado striking. Staffers were busy collecting the information and reporting it promptly. But the tornado is not the only thing that kept New Orleans' journalists up all that night.

About the time the local New Orleans television news was ending at 10:30 p.m., New York Times media reporter David Carr posted a shocking story, then tweeted the link. Carr reported several big management changes that could gut the city's Newhouse-owned paper. The wealthy Newhouse family owns many newspapers under the New York-based company Advance Publications. The Pulitzer-winning Times-Picayune is one of them.

Carr's late-night tweet is how many Times-Picayune employees learned that, in all likelihood, the daily newspaper would shrink to a three-times-a-week publication. Tweets multiplied throughout the Gulf South in the late hours. It was as if, more than one tweeter said, New Orleans had lost the Saints. The irony of the news spreading via social media wasn't lost, yet the in-depth and on-the-spot reporting came in before 2 a.m. from the city's alternative news weekly, Gambit.

Kevin Allman, a Gambit editor, had been following the story and knew many of the details Carr reported. A couple of hours after Carr's tornado hit, Allman posted his first story about the news and, from some New Orleans bars, the reactions of shell-shocked Times-Picayune staffers who had just learned via Twitter that their jobs might be in danger.

One unidentified reporter opened up to Gambit sometime Wednesday night after reading Carr's tweet. "Do I go into the office tomorrow? Do I even have a job to go in to tomorrow? I don't know. No one has called me. No one has said anything."

Rumors also swirled that other Newhouse properties in the Gulf South might face a similar fate, specifically three large daily papers in Alabama.

The next morning, The Times-Picayune made it official. While the paper wasn't ready to unveil all the changes, Carr's report 10 hours earlier forced the corporation to announce a new company, NOLA Media Group, that would include The Times-Picayune and NOLA.com. "The change is intended to reshape how the New Orleans area's dominant news organization delivers its award-winning local news, sports and entertainment coverage in an increasingly digital age," the website posting said.

A couple of hours later, a similar announcement popped up on al.com, a combined website for many Alabama news outlets. "A new digitally focused media company--the Alabama Media Group, which will include The Birmingham News, the Press-Register of Mobile, The Huntsville Times and al.com--will launch this fall to serve readers and advertisers across the state." Again, the corporate public-relations story buried the lead. Those three dailies would also no longer be daily publications. Instead, they would also print only three days a week.

The explanation from Advance Publications is that by printing less, staff can focus more on deeper news. But the corporation is also slashing staff--The Times-Picayune could lose 100 employees, or about a third of its staff. It is unclear how a smaller, demoralized staff would accomplish more.

Several reports about the prognosis of The Times-Picayune pointed out that the newspaper actually made a profit for its owners last year. This was not a newspaper that needed gutting because it hadn't performed.

Besides The Times-Picayune, Advance Publications owns the daily Mississippi Press in Pascagoula, the only Newhouse newspaper in Mississippi. The Mississippi Press, a much smaller paper, will also move from a daily to a three-times-a-week publication. The paper's website, gulflive.com, will continue to carry content from the nearby Mobile Press-Register. That leaves the Sun-Herald, a McClatchy newspaper, as the only daily on the Gulf Coast from Houston, Texas, to Pensacola, Fla.

Politicians and celebrities mourned The Times-Picayune's impending change. Warren Buffet even commented to an open letter by providing his suggestions on how the newspaper could make money. Employees sent their own open letter to management asking point-by-point how and when their jobs would shift.

They are still waiting for details.