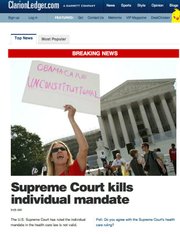 Gannett's Clarion-Ledger was one of several news outlets that got it wrong.

One of the year's largest stories didn't catch anyone by surprise. Reporters, editors and social media agitators were ready. The media outlets prepared for the U.S. Supreme Court's decision on the Affordable Care Act, ready to go either way.

Journalists researched possible implications before knowing the outcome of the decision. Producers filled talk shows with legal analysts. Online editors posted detailed graphics. Legal experts cautioned not to assume too much right away. It's a complex law, and the ruling would not be simple, they warned.

The point of the all the preparation was to be ready to break the news as soon as possible. Unfortunately, a few key journalists lacked patience.

Two TV networks blurted out incorrect summations. Minutes into the reading of the decision, CNN and FOX News announced that the Supreme Court had overturned the ACA mandate. Huffington Post and TIME magazine made the same error.

As soon as other media outlets read the tweets and heard the news, the wrong information rippled across the landscape. The Clarion-Ledger put a package up on its website with the headline, "Supreme Court kills individual mandate." The Gannett-owned daily also tweeted the news. Moments later, the Associated Press, MSNBC News and others reported the high court had found the ACA was constitutional. CNN and FOX were wrong.

Quickly, CNN tweeted and emailed corrections. Additionally, CNN put a bold yellow and black banner across the top of its website with the correction prominent.

The Clarion-Ledger tweeted the new correct observation of the ruling. While the wrong headline disappeared and an updated version of the story popped up, site keepers did not post a correction until the end of the day. Sam R. Hall, The Clarion-Ledger's new assignments and community engagement editor, wrote a blog about the mistake.

"Sometimes we get it wrong," wrote Hall, the former director of the Mississippi Democratic Party and, briefly, a tech columnist for the Jackson Free Press. He went on to explain how it happened and who was at fault.

Despite all caution, journalists do make mistakes, and they do gather inaccurate news, then pass it along. When that happens, policies should kick into play to reassure readers that the paper or website is on top of things.

Stephen J.A. Ward at the Center of Journalism Ethics at the University of Wisconsin-Madison studies the need for ethics in an instant-feed world. "The ethical challenge is to articulate guidelines for dealing with rumors and corrections in an online world that are consistent with the principles of accuracy, verification and transparency," Ward writes on the center's website.

In publications, standard practice is to put corrections in the next published issue, usually in the same section as the original error. Websites don't really have a page 2, at least not one that readers are going to check. As a self-governing profession, journalism can't afford to hide mistakes. To maintain reader trust, sites have to make a big deal about corrections.

The Canadian Association of Journalists suggests best practices for online corrections. They have a simple list of five practices:

• Be transparent about all mistakes.

• Ask readers to find mistakes, then make it easy for them to tell you what they are.

• Make corrections in a timely manner.

• Place corrections with the online article.

• Have the same standard for corrections across all platforms.

The Poynter Institute, a journalism think tank, says the rule of thumb is this: When you screw up, admit it, then say you are sorry. Don't justify it with explanations and excuses. Get the right information out and move along.

Poynter's Mallary Jean Tenore interviewed one of the media talking heads who got it right. ABC News Legal Analyst Dan Abrams offered this advice: Quote directly from the opinion and don't be afraid to say you don't understand what it means.