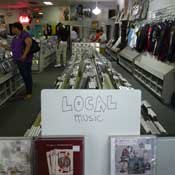 Be-Bop Record Shop, a vendor local albums and records for 37 years, will close its doors May 28.

As Kathy Morrison surveys the crowds browsing CDs in the aisles at Be-Bop Record Shop May 19, she is reminded of a time before iPods, MP3 players and iTunes.

After 37 years in business, Be-Bop announced that it will close its doors at Maywood Mart May 28. Bargain hunters and employees have been coming by in droves to reminiscence about the store, say their goodbyes and stockpile on music purchases. Sales have declined over the last few years. Hurricane Katrina destroyed Be-Bop's Biloxi store beyond recovery. Then, when it came time to renew the lease for the Maywood Mart location, Morrison couldn't negotiate with the landlord for a lower rent.

Over the years, Be-Bop has become a Jackson staple where patrons could find a wide selection of music, local bands' albums, vinyl records and event tickets. Closing the store wasn't an easy decision, Morrison says in between answering customers' questions.

"This has been most of my life," she says, adding that Katrina was one of the biggest setbacks. "That was just one big catastrophe," she says.

In 1974, Morrison, a Jackson native, opened the first Be-Bop store in Fondren next to the old Capri Theater with partners Drake Elder and Wayne Harrison. At its most successful juncture, Be-Bop's Jackson locations included County Line Road and Metrocenter Mall. Competing with big-box retailers that sold CDs at lower costs and online music downloads resulted in Be-Bop closing its County Line Road location in 2008 and Metrocenter in 2010. Be-bop closed its Starkville store in 2007.

Be-Bop's closing isn't unique. Over the last decade, well-known CD stores such as Virgin Records closed most of its 23 stores, including its mega retail outlet in New York City in 2009. Billboard Magazine reports that CD sales fell by 20 percent in the U.S. in 2010.

Giving the gift of music to customers has been a fulfilling and fun career, one that Morrison will look back on with a smile.

"We have always been very supportive of local musicians by selling their CDs or vinyl for them. We've always loved doing that and exposing customers to their music," she says. "It's always been about the music."

Larry Barnes has been a loyal customer at Be-Bop for as long as he can remember.

As he walked through the store, he tried to balance dozens of CDs such as B.T. Express and Johnny Taylor in one hand and a lava lamp in the other. Barnes frequently makes the 45-minute trek from his home in Crystal Springs to buy his favorite CDs.

"I hate to see it going out like this," Barnes says. "I spent a lot of time in these stores," Barnes says, adding that he'll probably go to Walmart to make his music purchases in the future.

While Morrison is sad to see an era come to an end, she looks forward to retirement, and says she will still maintain a small space in the former shop to host events and sell records.

During the store's last day, May 28, she invites local bands to perform.

"We'll be here selling whatever's left and partying," she said. "We want to have a good send off."

There was a time this was THE place to buy music, pick up concert tickets, rock memorabilia, etc. BeBop's closing, to me, is almost like losing a distant relative who played a small role in my life growing up. The times they are a-changin' (apologies, just had to say it!)