Microcosm of an Industry 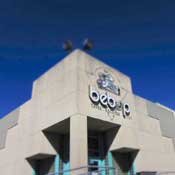 The Be-Bop Metrocenter location closed in 2009.

The Be-Bop sign still hangs prominently in Maywood Mart, but the shelves inside are empty. Be-Bop Record Shop was once the largest record store chain in Mississippi, but the last Be-Bop location, in Maywood Mart, closed in April.

"Our sales pretty much peaked around 1999 and 2000. We had eight stores at that time and were still growing, but along came CD burners and the penetration of the Internet into house holds," Drake Elder, co-owner of Be-Bop, said. "From there, we saw a 15 to 20 percent decline in business each year in the early part of the 2000s and since."

Elder said by 2005, sales at Be-Bop had leveled out. The store enjoyed a steady clientele that continued to buy CDs, and sales of gospel and blues helped. Younger shoppers tended to buy digitally over the Internet, if at all. Several other factors, among them Hurricane Katrina, the economic downturn and spiking gas prices, helped Be-Bop end.

Be-Bop is a microcosm of trends that have persisted since the launch of Napster, the first prominent peer-to-peer file sharing network, in 2001. Though other services have stepped in to fill Napster's shoes, each version further decentralized the peer-to-peer network to make downloads harder to track. Now, file sharing through websites such as http://www.BitTorrent.com are common.

Even with the ease that consumers can find downloads for free, the sales of digital tracks and albums are still the only thing gaining ground, in an industry that has seen record sales slide every year since 1999. The numbers for 2010 are no better. Nielson Soundscan reports that the record industry lost 2.4 percent on sales of 1.507 billion units in 2010 versus 1.545 billion in 2009. Total album sales in 2010 slipped to 326.2 million units, a 12.7 percent decline over 373.9 million units in 2009. Digital sales, however, continued to climb, with 86.3 million digital albums sold in 2010, gaining 13 percent over 2009 figures of 76.4 million albums.

Overall, the industry is changing its face as technology forwards the thinking of how music is produced and how fans consume. This process is changing the music business. Social networking and tech advancements allow musicians to record, distribute and promote through Twitter and Facebook. Independent musicians have discovered http://www.ReverbNation.com, a website that helps share music and information.

"In the modern recording industry world, the barrier to entry is much lower financially and otherwise," Jackson-based artist Scott Albert Johnson said.

This in turn, creates a greater number of artists that the recording industry has to sort through to find those it wishes to promote and whose albums you might one day find on iTunes. The greater number of artists creates hundreds of niches. The offerings are quickly becoming too much for a physical store to hold. Only digital space can provide what consumers demand.