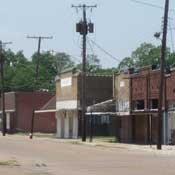 The rising Mississippi River is threatening the towns of Tallulah, La., and Richmond, La., in Madison Parish.

Dave Collins of Collins Farms in Tallulah, La., sits in his office, staring across his desk at his older brother Curt Collins who sits in a broad blue sofa, holding a phone to his ear.

"Well, are you hurt?" Curt asks his caller.

He sighs deeply and looks across at Dave. It seems one of their fertilizer trucks turned over into a ditch on its way back to Tallulah from Yazoo City.

"Just what we need on top of everything else," Dave says with resignation.

The "everything else" he's referring to is the rising Mississippi River threatening to flood into the surrounding Delta farmland and destroy what promises to be an amazing yearly crop for the Collins' and many other farmers in the area.

Tallulah is a small community nestled among the curving, levied banks of the Mississippi, a short drive across the river bridge from Vicksburg. Because of a heavy reliance on the surrounding farmland as their main industry, the residents of Tallulah are facing a crisis not seen since 1927.

The floodwaters are coming, and as the Mississippi River continues to swell, the citizens of Tallulah brace for destruction on a scale not seen in many of their lifetimes.

In 1927, the residents of the area experienced what was the last great flood for the area. Then, as now, the river waters threatened, but the levee systems were rudimentary and only built by the farmers to protect what little land they farmed, says Geneva Williams, coordinator of the Hermione House, the local Madison Parish museum.

As the waters rose higher, and the levees began to overtop, local officials made the decision to cut the levee at a plantation north of Tallulah called Cabin Teal. This allowed the floodwaters to invade the town from the north. Williams recounts that the town was greatly submerged, but the citizens persevered and the town recovered.

Richmond, La., Mayor Robert Kivett has been privy to the meetings with Louisiana Gov. Bobby Jindal and officials from the Department of Homeland Security concerning the potential flooding. Richmond is a municipality conjoined to Tallulah, the two towns share a post office and zip code. The two towns flow together seamlessly, but are in fact separate municipalities with separate governments. Kivett said that Madison Parish, where the towns are located, have an extensive evacuation plan and warning network of more than 100 police cars to go out into the rural areas and warn of the impending flood waters should the levees break.

If the levee should break 20 miles south of Tallulah at a place called the K.C. Ranch, residents of the parish would have three to four days to evacuate. If it breaks north, they would have much less time.

The U.S. Army Corps of Engineers has continuously updated the levee from Lake Providence, La., to K.C. Ranch over the decades. The exit route from Tallulah and Richmond would be west toward Monroe. Civil defense shelters would be activated in Richmond and Tallulah at the civic centers. National Guardsmen would barricade the shelters from the flooding and bring in food.

At this point, only several feet of water are expected should the worst happen, but with waters rushing down from the north and rain expected, those estimates could grow. The main concern, according to Kivett, is that the levees were not designed to sustain this water level for an extended period of time. The state government has also reported concern about the speed with which the water will be moving through the area as it passes near the town.

Jason Trichell, 5th Louisiana Levee District superintendent of operations, said that the levy is expected to hold, and that residents should not be concerned about sand boils that occur when water seeps beneath the levy. This process is expected and normal. By all accounts, the levee system surrounding the area will keep back the waters. His prediction will be tested on May 19 when the river is expected to crest.

The Collins brothers, like other farmers in the area, have taken steps to minimize the damage to their operation should the worst happen. They moved much of their equipment to higher ground on an abandoned levy south of Tallulah, but the farm continues day-to-day activities as if nothing out of the ordinary is happening.

"We're still farming, just like the river's at 19 feet. We can't just pack up and leave everything," Dave Collins said.

Although the Collins have crop insurance, like most farmers in the area, the insurance would not cover a total loss of their crop for the year. And total crop loss would not even be the worst issue: A flood could cover the entire area of fertile ground surrounding Tallulah with layers and layers of sand. This would necessitate rolling the ground with heavy equipment and tilling it to bring the topsoil back up—at great expense to the farmers.

Collins is matter of fact about what he and other area farmers face.