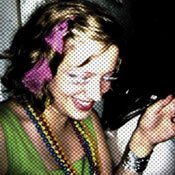 A guitar riff rang out over the cheers of an energetic Hattiesburg crowd packed into Nick's Ice House on a cold night in early December. Vocalist and guitarist Will Poynor ripped his guitar cord hooked up to a nearby amp and shoved it into his mouth, teasing shocked onlookers. Energy filled the room in waves, and everyone began to dance. Distorted chords and amplified reverb let the crowd know that The Squirms embody an old-school rock ‘n' roll bar band.

Florence, Miss., natives Will Poynor, 31, and Jed Newell, 30, played together in various bands since 1997 before forming The Squirms in 2003. Poynor leads the band as its guitarist, vocalist and principle songwriter. Newell is the drummer. Bassist Warren Ard, 35, from Tylertown, joined the band in 2007.

The Squirms acquired the name from a lyric in "Major Total," one of the first songs Poynor wrote before the release of the band's debut album. Though the origin of the band's name is traceable, The Squirms' labeled genre remains debatable. Poynor classifies the band as "rock ‘n' roll with dashes of chaotic psychedelic flourishes" while online critics and local fans call it rock ‘n' roll, neo-psychedelia, psychedelic swing and American underground.

Released on Poynor's own Rad City Records, "Riff Randell" as a whole is consistent lyrically and sound-wise. Each of the 10 tracks delivers a feel-good sensibility but on different levels. Headbangers beware: The Squirms lack heavy riffs and brooding lyrics.

Poynor said the album is introspective and optimistic. "After our record came out, I realized that every track is a love song," he said. "There's not a lot of negativity going on."

Structurally, the A- and B-sides of "Riff Randell" are distinct but cyclical. Side A is upbeat and bright while side B immediately introduces a more cryptic sound but then transitions back to the record's original sunny timbre.

Many of the tracks offer listeners the same mellow vocals and fuzzed-out guitar chords, but each is independently entertaining. "I Adore You" stands out from the other songs with its melodic, up-beat intro. Track seven, "The Rippers," is a heavier, more alternative track, exuding a '90s rock tonality.

"Unlike ‘Heads Like Balloons,' we actually knew what we were doing with this album," Poynor said. "We finally put out a record that sounds like our band. We managed to make a record we're happy with regardless if we sell anything."

"Riff Randell" is available at T-Bones Record Shop and Café in Hattiesburg, Amazon.com, iTunes and will be on the music-streaming service Spotify. The Squirms' next live performance is Jan. 13 at The Tavern in Hattiesburg. In late January, the band will also release a seven-inch vinyl with "Molly of Holly" and "She's So Rad," two singles from "Heads Like Balloons."

"Honestly, making music makes me feel like a human being," Poynor said. "I feel like I have to. It's a part of me. That's the great thing about Hattiesburg. It gives artists like us an outlet. It's the rad Hub City, and we're the psychedelic warlords."

Find out more about The Squirms at http://myspace.com/squirms.