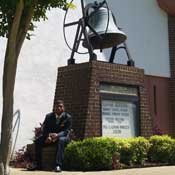 On its Facebook page, the Farish Street/Main Street Project says that it "seeks to stimulate revitalization in the Farish Street Historic District by encouraging cooperation and building leadership in the business, residential, church, city, state and community partners of the District; promoting educational, social, and health-and-wellness projects and activities; creating a positive image for the District as an exciting place to live, shop and invest; improving the appearance of the District; and receiving, administering and distributing funds in connection with any activities related to the above purposes."

That's a big, broad mission, one that we asked the organization's president to refine for us. Rev. CJ Rhodes is the minister of Mount Helm Baptist Church, based in the historic Farish Street district, and a Jackson Free Press columnist. He was elected to his position with the project in April. We spoke by telephone last week.

Are you working with developers?
One of the things I set up in my tenure is for Farish Street/Main Street is to set up a clearinghouse for best practices for visionary strategies. We do have representatives from David Watkins' group come to the meetings; we have been in conversation with the NAACP and others who are wanting to be in dialog about some development. When I got on board I understood that Farish Street/Main Street is not in the best place to try to "be" development. We just want to make sure that whatever development happens best encompasses the historic district as well as new development that would benefit those who are already there and attract other persons in the city and the state to live, to work, to play.

Farish Street is enormously important to the African American community in Jackson. Do you feel development may be insensitive to the historic perspective?
We wanted to make sure that whatever happens in the eight blocks—though we know that (through) new development (it) will take on new character, add new history, new meaning—we nevertheless want to make sure it preserves the historical content of the district, because it was the center of the African American culture and commerce. It can't be an exact prototype of what the district was before desegregation, but it needs to gesture toward that. Over the last 30 years, so much of the district has gone into disrepair. So many torn-down houses, blighted houses, things like that. What we would love is for there to be new development, housing stock, new businesses, and of course, welcome white citizens, but that it doesn't become a whole gentrified area where it pushes all the black people out. Let me clarify that: We don't have a lot of residents in the district any more, but what we don't want to see 10 years from now, for example, where all of Farish Street looks nothing, or in no way gestures toward what it was in the '50s and '60s.

Some of the folks in the district don't own their properties, and they may well be looking at higher rents because of development. Is that a concern?
One of the things we've always advocated for is that residents be at the table. One of the debates we've had at the FSMS meetings is how to classify those persons who live in the district. I demanded that we call them residents; there were some at the meetings who said: "No. They're not residents, they're renters." I think if you live there, you are a resident, so let's not get into semantics. There are some who say: "Well, if they're renting, they don't own anything. They can take the higher rents or move somewhere else." I wanted to say, "Let's make sure that whatever we do is cognizant of how this will impact the persons who still live there." You're talking about elderly persons, you're talking about people who have ... property. We don't want to just play musical chairs. We don't want to just move working class people out of that district and push them to another place without really taking seriously their livelihood, what the Farish Street district means for them as a place they've lived for much, if not all of their lives. We wanted to monitor to make sure that any development, particularly residential development, will be cognizant of that.

When people start making that distinction between renter and owner, it sounds like you're getting into a classic gentrification argument.
Some of these persons are white, but actually a number of them are African Americans. I think where they're coming from is a frustration that nothing's happening in the district. In 30 years, you have people who actually were residents of the district who say, "We need some movement." For them, they say "We don't want to hinder development for the whole district just for a few folks who are renting."

I guess for me, my philosophy is that we've romanticized the district. The Farish Street district wasn't just middle-class blacks—creative, commercial black folks. There were also lower-class and working folks. There were day workers and laborers, and people like in "The Help" who rented ... I'm sure there are outside threats, people who are sort of eyeing the district waiting for the fall, the cheap land and what they could do with it—but I also think one of the threats may be the emotion attachment that people have to Farish Street. By that, I mean, that if we're too emotional about it, we may not be level-headed about how we need to go about development. One of the things that I've been doing since I've been president is inviting people who have a social conscience and understand the importance of the Farish Street Legacy, but also have the innovation, creativity and the energy to imagine how we need to redevelop. Sometimes we can be so emotional that some of the decisions some people try to make just aren't going to be good business moves.

... When I got to FSMS, there were these various groups and property owners, 20 or 30 people all had plans that they wanted to do for the district. I started thinking: "This is like a quilt. There's really no comprehensive plan." That's my fear, that without people coming to the table really having intelligent, innovative conversations, we'll end up with a mess in terms of development down there.

Anything else?
One of the things that I envision for Farish Street is that Farish Street can embody what it means to live out
(Dr. Martin Luther King Jr.'s) dream of "Beloved Community." The way I imagine our development going forward is that it would do everything to resemble the beloved community.

To find out more about the Farish Street/Main Street Project, visit its Facebook page. The project meets every first Tuesday of the month at 5:30 p.m. at the Central United Methodist Church in the Family Life Center (500 N. Farish St., 601-355-7858. "We welcome any and everybody," Rhodes said.