Watkins Puts His Money Where His Mouth Is | Jackson Free Press | Jackson, MS

Watkins Puts His Money Where His Mouth Is 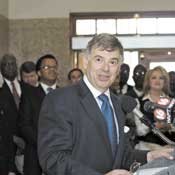 After a host of leasing delays, developers of the historic Farish Street Entertainment District have decided to sweeten the deal for entertainment venues by kicking in almost $5 million in personal build-out money.

The Jackson Free Press reported last month that B.B. King Blues Club signed a lease deal with Farish Street developer Watkins Development, LLC, but that the nature of the deal commits Watkins Development to fund further construction and build-out for the venue.

David Watkins, President and CEO of Watkins Development, said he got tired of waiting for investors and loans and decided to prop up the build-out with his own funds.

"I put $4 million into it, and I'm continuing to put more money into it. That's personal money," Watkins said. "It'll be alright because the reward will be worth it. I got tired of screwing around. We've made a gut-wrenching decision that we're just going to move forward, to put more money into the project. Whatever money the tenants have come up with, we're going to backfill those shortstops with additional equity investment from us."

Watkins made the announcement after The Clarion-Ledger ran a story reporting the Jackson City Council's impatience at seeing slow progress on the Farish Street Entertainment District.

Last Tuesday, Downtown Jackson Partners President Ben Allen gave the council an update on various developments including Farish Street. Allen told the council that the state of Mississippi had backed out of a $5 million loan for the project, which has pushed Watkins to overcome the $5 million financial void.

"How that turned into Ben Allen saying the project is stalled is honest-to-God beyond me," Allen told an audience of about 50 at Koinonia Coffee House June 10.

Allen made no reference to the project being on hold or on the shelf during his portion of the council presentation, which included input from Jackson developers Mike Peters and Ted Duckworth on the need to reauthorize the DJP-managed business improvement district. In fact, Allen told the council that he believed Watkins would succeed in opening venues in the district soon.

Watkins had been expecting a $5 million state bond from the Legislature to supply the build-out money, but legislators did not include the $5 million in a $420 million bond package for statewide projects this legislative session.

The arrival of the B.B. King Blues Club heralds the opening of other venues, according to Watkins.

"They finally agreed to (move in) in December, so we know we got B.B. in December. That triggers three other clubs that were waiting for B.B., so they'll hopefully be in by December or soon after," Watkins said. "Thankfully, these other three clubs already have their (build-out) money. We hope to have five clubs open by December. The remaining seven or eight will be open within 12 months."

Finding venues to sign leases on Farish Street is no easy feat, because Watkins and developers want the area to host considerably high-end venues.
"We want young clubs and young and local entrepreneurs, but we require that they have some financial stability and depth, because the last thing we want are revolving doors. We turned away a whole lot of clubs where the owners did not have the financial stability to pay the rent. If they generate less than $1 million in revenues, they're not going to stay in business down there," Watkins said. He adds that most venues opening in the area must expect to serve "500 meals a day."

Watkins said the main reason he was personally reaching into his own pocket was because of "the pressures of the public and the politicians who want to see something right now."

So far, developers expect Wet Willie's Daiquiri Bar and Red Rooster to be the next venues to open this year or early next year. Watkins said he also expected an as-yet unnamed upscale cigar lounge and premium liquor club to also open its doors.

Although Watkins Development LLC is in charge of developing the district, the property is owned by quasi-government entity Jackson Redevelopment Authority, which has been holding off charging the developers lease money as they jump through an army of hoops.

"The banks, it seems, don't consider Farish Street to be a high priority," Reeves said. He added that if anybody was likely to complete Farish Street it would be Watkins, the developer who spurred the renovation of the King Edward Hotel and the Standard Life Building.

The Farish Street project is 85 percent complete. Watkins expects total investment in Phase 1 of the project to be $11.7 million after build-out costs.
Every restaurant, Watkins said, is required to have four days of live entertainment a week.

OK, two things. Two days after Adam published the above story, The Clarion-Ledger apparently did another story backtracking out of their report that Farish Street was "on the shelf." Also in that story is one of the most tortured sentences I've ever seen in print. I haven't commented on the Ledger's bad writing in a long time -- beating a horse when it's down and all that -- but I have to share this one. I cannot believe this made it into print. Note the two passives in the beginning of the sentence and how it runs on. (And this is the paragraph-sentence that actually does much of the backtracking; thus, I assume editors must have labored over it to get to this.) The nightmare sentence: The district's status was questioned last week when the Jackson City Council was told by Downtown Jackson Partners President Ben Allen that the entertainment district seemed to hit a snag because developers needed more money after a failed attempt to secure $5.5 million in bond money from the state Legislature. Ledger, Ledger, Ledger ...