My Advice to James ‘Kingfish' Hendrix

I woke up this morning very concerned about a particular race that appears on some area ballots. No, it's not Personhood, voter ID or the governor's race, although I'm very concerned about those, too. It's about what amounts to a late entry into a local judge's race. But before I explain why I'm worried, I want you to do a quick Google on "Ronni Mott" and see what comes up. When I Google my managing editor's name, the seventh headline is, "Jackson Jambalaya: Is Ronni Mott a liar, hack, or just plain stupid?" 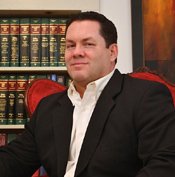 If you know Ronni, you know she is anything but those things. She is an amazing woman who started here as an intern after leaving a marketing career at WorldCom and worked her way up to managing editor. She is the reason the paper gets out on time each week and in such high quality, and she has probably done some of the most in-depth, thorough and engaging domestic-violence investigations in the country (she won top honors for that work from the southeast version of the Society for Professional Journalists). (See her DV work here.)

But a local blogger—who goes by Kingfish and Jackson Jambalaya in his posts, not his real name which is either James "Jimmy" Hendrix or James Whitehead—is not beyond such character assassination, and if you go read her writing he was referring to, it was a minor blog post about the president's stimulus plan. I still can't imagine why he would overreact in such a way to such a thing. Sure, criticize her opinion, but that level of overblown headline for a political disagreement? Really?

It wasn't the first time Kingfish had verbally attacked one of our staff members, though, in an over-the-top way. In fact, when he used to post on this site, it was exactly that—a somewhat threatening comment to a visiting Latino reporter on an immigration thread that finally got him evicted from the site. (I had banned him previously for violating the user agreement, but he begged back on the site, promising more respectful behavior.) But when I banned him that time, he went off and started his own blog with the JFP as one of his favorite targets.

That part didn't bother me. It's not like we don't call out other media outlets and their practices and reporting. There is a good place for media criticism in the world. It keeps us on our toes. But with Kingfish, it's nearly always personal and for a woman, it's really vicious -- with words like "hack," "liar," "slut" and such generously peppered in. (I, apparently, was a "journalistic slut" after I dared give Sheriff Malcolm McMillin a forum to refute Kingfish's accusations about him in the Stuart Irby case; the sheriff said the blogger had never offered him a chance to respond to the site's contentions that he had gone easy on Irby. I still believe that that blog's character assassinations of the sheriff are probably what eroded trust in the sheriff and helped bring his defeat this year.)

After I banned Kingfish, he continued calling and emailing me, sometimes incessantly (reminding me of how Frank Melton would do back in the day). At first, I answered him and tried to be pleasant, but then he went after one of my editors, who happened to be black, making it sound like she got a fact wrong in the Jena, La., case because she was black -- of course, it was a fact that national media outlets got wrong as well, and everyone corrected it. This editor/reporter was young and eager, and one of the fairest people I know, especially on race issues. I wrote and told him how unfair it was to attack her publicly in such a way and then told him not to write or call me again. Of course, then the anti-JFP blogging got even worse; the Ronni slam came much later than that.

I've been asked over the years since that blog started why Kingfish and I have such a battle going on. I always point out that I don't have a battle with him, and I have no desire for a petty battle with any blogger. I've ignored him because that seems the wisest choice: the whole "don't feed the trolls" mantra on the Internet. Plus, I just don't like to dwell on negativity, and I actually have compassion for those who fall into that trap. Then I tell the folks who ask that he is angry at us because we banned him from the site. It's really that simple.

I'm breaking my silence on him now, though, because he is on the ballot today for justice court judge—which he didn't officially make public until late Friday on Facebook and then yesterday on his blog--the first time I've ever seen him use his real name on a blog that is supposedly dedicated to "reporting" and allows vicious personal attacks on all sorts of people of the public and private spheres. We've known he was on the ballot, but he has told various people that he was going to remove his name from the ballot, that he wasn't serious. Still, my reporters have tried to interview him for weeks, offering him the same kind of Q&A interviews we've given other candidates -- the journalistically ethical thing to do -- and the opportunity to answer some questions and respond to rumors about his seemingly mysterious past (which includes changing his name from James Whitehead some time back).

But he has refused, texting in accusatory ways at night that we were trying to do an attack piece or that we should get our facts straight (more shades of Frank Melton: he used to call me at night to say similar things, and my facts were usually pretty straight).

Here is the problem we all face now: Jimmy Hendrix is running to be a judge. He has made himself into a public figure. The same man who posted (and has never taken down) that vicious statement about Ronni Mott due to a mild blog post, and who wigged out on my Latino and black reporters, not to mention posted falsehoods in some cases, wants to adjudicate cases and disputes. He wants to have access to people's personal information (will he continue running the blog if he does? One question we would ask if given the chance.) The man who encouraged character assassination on Sheriff McMillin without calling him for response wants to be seen as a fair arbiter of justice and get paid by the taxpayers to settle disputes.

Perhaps most ironic at all, the man with multiple names is running, it seems, based on his efforts to promote transparency. Allow me to give him credit here: In his better moments, Kingfish has struck me as someone who could be a bulldog investigative reporter. He has fought for public records at times; and he has dug through court documents to figure out corrupt practices of (some) people. But then I see his vicious personal attacks and the kinds of anonymous posts he allows (which as a website "publisher" he is at least ethically responsible for), and I realize that he is his own worst enemy and is squandering his potential. He is not a journalist or a reporter; he is a gadfly who puts some important documents on his site, and then allows the most vicious and racist threads around them. He will dig for public records, but then he won't call and ask for people's response for needed context for those documents (or the basic ethical fairness that we journalists have to embrace). He has played at being a journalist, and he likes to surround himself by media types (but then scares them as he did me when he randomly sent me a photo of himself in a skimpy toga long before I met him).

Now he is playing at being a judge. He won't return calls to answer questions about himself even as he talks about his efforts at public-figure transparency. He waits until the last hour (because he didn't want to answer questions? Don't know.) It all leaves a sinking feeling in my stomach that reminds me of the way I felt when I was trying to get Frank Melton to do an interview during his campaign about both his plans and his history, and he wouldn't do it. That one came home to bite us, and I don't want this one to as well.

My advice to Hendrix is to get serious. If he wants to be an investigative journalist, then put his real name prominently on his site (like on the "About" page) and then study the principles, techniques and ethics of doing real journalism. If he is nervous about interviewing people, well, most of us are too the first few hundred times we do it. Practice and work can overcome it. And if he wants the rumors and questions about him to stop swirling, then he needs to answer them publicly in real interviews with reputable media outlets and on his own sites. And if he wants women (journalists and otherwise) not to be creeped out by him, he needs to keep his half-naked photos to himself, make sure he's not making advances on them in professional settings and stop the cheesecake bikini photos on his site.

That is, make the kinds of people who use their real names in public take him seriously.

Until he shows this kind of seriousness about himself and about public transparency, this blogger certainly should not be elected and paid by the taxpayers. The ball is in his court. It's time for Kingfish aka Jackson Jambalaya aka James "Jimmy" Hendrix nee James Whitehead to clean up his game. Until he does, he does not deserve your votes.