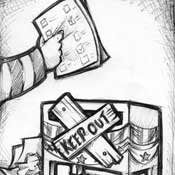 In the decades after the 15th Amendment was ratified in 1870, granting American citizens the right to vote regardless of race, white southerners developed methods to circumvent the amendment and keep African Americans out of the voting booth without attracting federal intervention.

While many black Mississippians served in public office during Reconstruction, the conservative white majority soon pushed back and instituted measures such as poll taxes, gerrymandering and literacy tests to keep African Americans from voting.

Blacks who wanted to vote could also face outright violence from paramilitary groups such as the Red Shirts, founded in Mississippi in 1875, or white-supremacist terrorists such as the Ku Klux Klan. "Southern brigadiers" began the Red Shirts as a paramilitary group to keep black Republicans from voting after the Civil War. Wearing red shirts, they disrupted rallies, helped suppress the vote at polling places, and threatened and committed violence against black leaders. The effort spread to other states, including the Carolinas, where the Red Shirts became an infamous anti-African American force.

The Red Shirts helped patrol the streets of Wilmington, N.C., during the Insurrection of 1898, when whites violently overthrew the elected black government of the until-then majority black city.

The League of the South, a current neo-secessionist group, wears red shirts to indicate their opposition to civil-rights policies such as those espoused by the NAACP and the Southern Poverty Law Center. A group calling itself The Red Shirts regularly holds "flaggings" around the south to support flying the Confederate flag over public buildings and to protest politicians they see as hostile.

The Klan, which has re-emerged several times since several Confederate veterans started it in Pulaski, Tenn., in 1865, is best known in part because its violence occurred during much of the 20th century. In 1964, for example, Ku Klux Klan members murdered civil-rights workers James Chaney, Andrew Goodman and Michael Schwerner for trying to help African Americans in Neshoba County register to vote.

In many cases, political maneuvers and scare tactics succeeded in keeping black voters away from the polls. In 1981, J. Morgan Kousser, a professor at the California Institute of Technology, provided written testimony to a congressional subcommittee that was considering renewing Section Five of the 1965 Voting Rights Act, which requires southern states to clear changes to voting laws with the Department of Justice.

Kousser wrote that during and after Reconstruction, southern Democrats—the conservative, white, majority party in the South at the time—used at least 16 different tactics to hamper black political power without denying the vote to enough people outright to invite federal intervention.

Mississippi's "pig law," passed in 1875, barred people who had stolen any property valued at $10 from voting. Other states instituted similar bans for people convicted of minor offences with prospective African American voters as the target.

In 1895, South Carolina prohibited those convicted of housebreaking, fornication, wife beating and miscegenation (race mixing) from voting, while allowing murderers and embezzlers to vote. In 1901, a white delegate to Alabama's constitutional convention suggested that banning wife beaters from voting would disqualify 60 percent of black males.

In predominately black districts in the South, election officials would move polling places several times during the day or refuse to open the polls at all. In an effort to keep those who could not read from voting, states instituted literacy tests (sometimes allowing questions like, "How many bubbles in a bar of soap?") and quizzes over constitutional law, and denied people assistance in filling out ballots if they could not read.

South Carolina divided its candidates on eight ballots that voters had to place into the correct eight ballot boxes. Poll workers would then shuffle the boxes during the day to make it difficult for literate voters to help illiterate voters put their ballots in the right order before entering the polling place.

Mississippi was also notorious for its "Shoestring District," which followed the Mississippi River in a thin line so as to concentrate as many black voters into one district as possible.

This "gerrymandering"—named for Gov. Elbridge Gerry's efforts to engineer a district to benefit his party in 1812—ensured that while blacks might have a majority in one district, they would not gain political power over the rest of the state's districts.

Some of the same tactics used in the South could also be deployed against other groups if their votes challenged the status quo. In 1882, The New York Times reported that Wisconsin had a shoestring congressional district "almost as remarkable as the one in Mississippi."

While this state's district concentrated African American and Republican voters in one area, the Wisconsin district collected foreign-born residents and Democrats in an area stretching from Milwaukee to Green Bay.