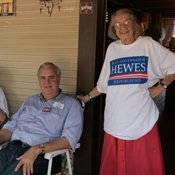 Bill Luckett, a Democrat running for governor, rubbed elbows with Republicans such as this Billy Hewes supporter.

Even though Democratic candidates are the minority at the Neshoba County Fair, many see the Republican-heavy grounds as a vital campaign stop to rub elbows with party supporters, media and even a few undecided voters.

The majority of Democratic candidates shied away from social issues and played up their strengths in economic development, job creation and education. Democratic governor candidate Johnny DuPree stuck to his platform of education reform. Bill Luckett, who is also running as a Democrat for governor, waved a toolbelt in the air as he talked about his efforts revitalizing Clarksdale.

While the audience abstained from heckling and booing the Democrats, many talked among themselves during their speeches. Bryant and Barbour, however, appeared to have rock-star status and received a standing ovation as they took their pulpits.

Ocean Springs Mayor Connie Moran, who is running as the only Democrat for state treasurer, highlighted her background recruiting new business and industry to the state when she worked for the Mississippi Development Authority and rebuilding her town after Hurricane Katrina.

"As a Democrat, we seem to be outnumbered," Moran told the Jackson Free Press. "We joke around and say it's the Republican Woodstock."

Instead of shaking every hand at the fair, Moran focused on networking with members of the Mississippi Municipal League and the Mississippi Economic Development Council.

"The main reason in coming is to do a speech, connect with media and make statewide contacts with municipal officials and economic officials and asking for their support," she said.

After giving his speech, Luckett attended a Yates Construction luncheon where he networked with a mix of Republican and Democrat business leaders.

At one point, a man from Scott County approached Luckett and told him that he supported Dave Dennis for governor, but since his county's races were predominately Democrat, he would vote for Luckett in the Democratic primary.

"Dave and I have very similar backgrounds," Luckett told the man. "We are job creators and we want to do what's best for the state and stop cronyism. ... Dave and I both got into this race for the same reason: We do not want Phil Bryant running this state."

Former Democratic governor Ronnie Musgrove, who ran for U.S. Senator in 2008, said the media attention is a big draw for candidates--Republican or Democrat. When he campaigned, he also used the fair as an opportunity to gauge public opinion.

"It is a congregation of people all over the state," Musgrove said. "It gives you a sense and feel of what people are talking about if you spend more time listening than speaking."

Not what she said, Robbie. I could make extreme statements about who has the right to vote. And it doesn't mean that all statements about the right to vote are extreme. It is radical for a gubernatorial candidate in one of the country's sickest, fattest, poorest, least educated and most Christian states to disavow all personal or governmental responsibility for the sick and needy. I mean, freakin', wild-ass, scary, no-good, embarrassing and, shall I say, downright un-Godlike radical.

Phil, Phil, Phil...... you "are not responsible for keeping us well." Then why are extreme right Republicans always trying to determine what women can do with their bodies, ie reproductive rights?? Personhood initiative is more extreme Right poo poo. As my 70 plus year old aunt says, extreme Republicans are only terribly concerned about you when you are a zygote...once you get here they could give less than a d$%n if you are mired in poverty, poorly educated, have no health care, can't get a job, etc, etc. When will you guys stop the hypocrisy? I am truly amazed at what I have witnessed play out with this political party over the last 30-35 years.

I bet Dupree and Luckett couldn't stop thinking C., G. and S while over at that republican carnival. I won't even mention sheriff Rainey and deputy Price. I'm proud of them for showing up and trying to garner votes nonetheless. I will probably get as many votes out of that crowd than they will and I'm not even running. I can malign Neshoba County because I'm from Winston it's partner in crime and next door neighbor.

In all honesty, you'd be surprised at how many of those fairgoers actually vote Democrat even though they "think" Republican. Especially if they have an 'ole pal who is running as a Democrat for some local office, they'll vote in the Democratic primary. Vote Luckett!