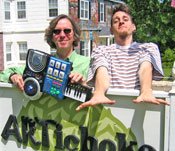 There is something happening in Jackson: Creativity has met community, and they are embracing. All kinds of artists are experimenting and collaborating, playing with form and context, and looking to share the experience of creativity in a supportive community. The Mississippi Improv Alliance is an exemplar of creativity gone communal. Musicians who like to improvise have morphed into something more.

I met daniel johnson—who prefers to keep his name lower case— at Cups to talk about the Mississippi Improv Alliance and their upcoming event, "bloom: four trios in directed improvisation." Relaxed and friendly, johnson's eyes are clear and alert as if there was nothing else on his mind but the present moment.

How did the idea of directed improvisation arise for "bloom"?
Each one of us, the four people who mostly organize anything within MIA, decided to do an event where each one of us created a (musical) trio. We had been discussing doing smaller ensembles and shorter sets. It is directed and each improv has its own concept. It offers kind of a counter balance to Winter Wednesdays, which had seven musicians and eight dancers.

How has the audience grown?
Over the past year as we were doing isolated events, there was growing recognition of who we were and what we were doing. But we never had another event coming up when we did an event. So then we created the Winter Wednesday Series to create more presence for ourselves.

What are Winter Wednesdays?
It was the first series we did. For the past year we had been doing a lot of isolated events. We started out doing them almost strictly in bars. One of our goals was to really get into the community—get into spaces where people don't normally experience music and creativity—and give people a different context for community space, so that when they are in it after(ward), post-event, they will think creatively. They'll have that memory. The Winter Wednesday series was something we came up with to create some momentum and more recognition of what MIA was trying to do. Every Wednesday in February we had a different set of musicians, a different venue, and tried to create a different experience. All of them were strictly free music events.

There is a real line between art and regular social living. We are tying to blur that line. We really want people to leave an MIA performance and not feel like that energy is gone. To feel that spontaneity and carry to it into the next day, to feel creative … like there is something more there; a deeper sense of self and experience that they can pull out, than what they were normally doing the day before.

Sounds like it's about mindfulness.
Mindfulness is the root of my interest in improvisation itself. Pulling people into improvisation experience is just a chance to bring people into what I am trying to do all the time. To me, life is improv, itself. Preconceived notions get in the way and prevent you from being genuine.

Mississippi Improv Alliance presents "bloom: four trios in directed improvisation," Saturday, April 26, from 2-4 p.m. in the space behind ARTichoke at 1012 E. Fortification St. Participants include Chris Alford, Robin Bordeaux, Bruce Golden, daniel johnson, Tyler Tadlock, Will Thompson IV, Jonathon Wires and Walter Young. Bring a picnic lunch, a cooler for drinks and cushions or chairs as there will be no refreshments for sale and few chairs available. Audience participation is welcome.