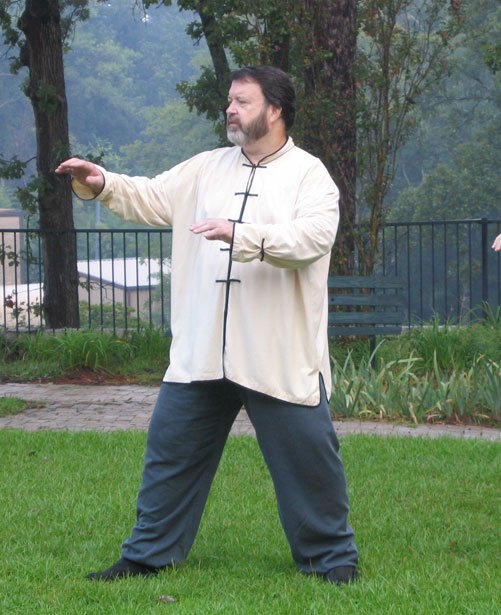 It is Saturday morning. The trees are swaying, and the ground is damp from a pre-dawn shower. Sunlight filters through the cloudy but clearing skies. In a garden courtyard, Stanley Graham is leading a small group in Taiji (T'ai Chi). They begin with silk-reeling exercises, a series of warm-up exercises that moves every major joint in the body in a circular fashion. I join them as they perform the motions slowly, evenly and mindfullythe same way the Chinese say silk must be pulled from a cocoon so as not to break the thread. Our breath flows naturally with the movements, and the movements themselves are rounded and symmetrical.

The silk-reeling exercises are punctuated with a closing movement: Our arms sweep up and out until our cupped hands nearly meet above our heads; then we draw our hands down in front of us and into our diaphragmsas if we were gathering energy from around us and pushing it into the core of our body, into what the Chinese call the dantian. Taiji is all about energy; becoming sensitive to how it flows, inside and outside of the body.

After we finish silk reeling, the group practices the Chen form, a fluid series of 48 moving forms or postures. It is graceful and slow, but there are punches and blocking motions, too, which resemble fighting. After Chen, the group practices the sword form, which is similar to Chen, but with a sword (or a stick or cane in this instance). Despite the martial elements in the movements, the feeling created with the mindful and measured movements is one of serenity and peace.

Graham says Taiji was once a secret weapon, a way for family clans to defend themselves from marauders. Members of the family clans kept knowledge of Taiji within the village and only taught to other clan members. Modern forms of Taiji originate from Chen Wanting (1600–1680 C.E.) who first taught simplified techniques to outsiders, namely the guards of the Chinese Emperor. Today Taiji encompasses a variety of techniques including the choreographed forms that look like martial arts in slow motion, silk-reeling exercises and standing meditation.

"It's all meditation," Graham says.

"I was in really bad health before I started," Graham says. "I was pretty depressed. I was sleeping 12 hours a day and was walking with a cane, not really able to do much of anything.  Within three or four months (of practicing Taiji), I needed much less sleep. I wasn't depressed anymore. I had major increases in my mental acuity. Physically, in about a year I was able to walk without a cane."

Graham, 60, teaches the Chen and the Yang styles of Taiji. He has been teaching for nine years and practicing for 16. He offers classes through the Community Enrichment Series at Millsaps College and soon will offer classes at Butterfly Yoga. He also will teach in people's homes. It is an ideal practice for anyone who needs a low-impact form of exercise.

"I've had three students with rheumatoid arthritis," Graham says, "and they have all experienced gains."

• There are many styles of Taiji, but five styles dominate: Chen, Hao, Sun, Wu and Yang

• Taiji was once a secret form of self-defense taught only within clans.

• The Chen style was the first form of Taiji made public when it was taught to the imperial guards of the Chinese Emperor in the 1600s.

• Taiji may be a martial art, but it is a perfect low impact form of exercise for people suffering from stress, arthritis or who need to improve their coordination, balance, energy level, concentration and range of motion.