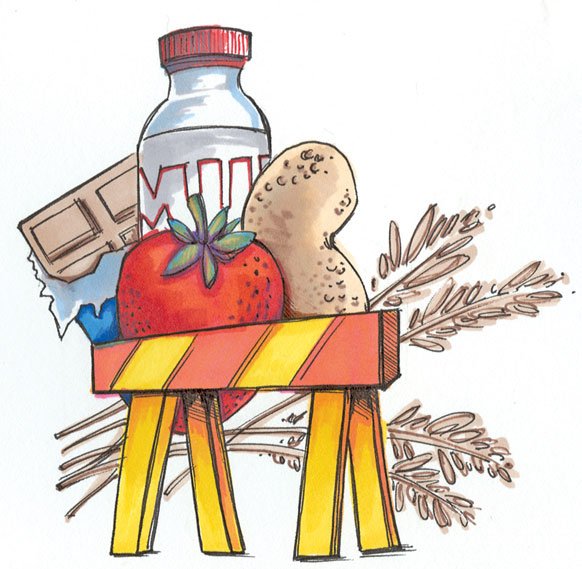 Before we were married, my fiancée dropped by my house with her two teenage daughters one Sunday afternoon. Michelle, the younger daughter, was 16 at the time. She hugged me at the door, then they swarmed in and pulled me to the couch. We all sat down, and she talked about her near-death experienceyou know, the kind of experience where you are surrounded by light, spiritual beings and a feeling of unconditional love. She had spent the weekend in the hospital after going into anaphylactic shock and had nearly died because she ate a cookiea cookie with a nut in it. Michelle has a severe allergy to tree nuts.

"Food allergies are on the rise," says Dr. Sitesh Roy, a Jackson allergy pediatrist. Almost unheard of in undeveloped countries, food allergies in the U.S occur in about 8 percent of infants and young children, and in about 4 percent of adults, according to Roy. "Chances are there will be two to three kids with allergies in a class of 30 students," he says.

The numbers in Mississippi mirror those in the nation. Allergic reactions to food can range from mild rashes to anaphylaxis, a severe immunological response. The body perceives the allergic substance as an invader and floods the body with histamines and other immunological mediators, causing the body's vascular system to dilate. This can lead to a sudden loss in blood pressure, hives, swelling of the throat and wheezing. If left untreated, anaphylaxis can cause unconsciousness and even death.

Although most children outgrow their allergies as adults, parents often struggle to provide a safe and normal environment for their children with severe food allergies. Joy Hogge is such a parent, and her son, Sam, has multiple allergies. "At the worst point, he was allergic to peanuts, tree nuts, dairy, soy, fish, shellfish eggs, and he was sensitive to corn and wheat," she says.

It took Hogge some time to adjust. She had to rethink food completely and read food labels carefully. "It was so hard," she says. "I used to measure my adjustment by how many aisles I could get through at the grocery store before I started crying."

Eating isn't the only potential hazard. Sam loves baseball, but unfortunately, peanuts are part of the baseball culture. "Every morning before a game, I go, and I clean the bleachers. I clean the dugouts, and get rid of as many peanut shells as possible," she says.

Eight food groups account for 90 percent of all food allergies, and the Food and Drug Administration passed a law in 2004 requiring food processors to list any ingredient derived from these food groups. However, there is no law requiring food processors to reveal whether a food product was processed in a facility where one of these eight foods have been processed, although many do it voluntarily. Cross-contamination is a concern for children with strong allergic reactions. When in doubt, it is best to call the manufacturer.

Hogge's son is contact sensitive to peanuts and dairy. In school, his classmates wash their hands before class and after eating to avoid passing allergens by touch. "It's a constant thing because anywhere he goes, people have to be informed," she says. "People have been very supportive, but it's constant."

Fortunately, awareness of food allergies is increasing. Jackson Public Schools has a plan for managing food allergies in their cafeteria and classrooms. The Mississippi Hospitality and Restaurant Association is promoting allergy awareness through member programs. To find information on coping with severe food allergies, the Food Allergy and Anaphylactic Network is a good source.

A little more than a year ago, Hogge helped form the Mississippi Food Allergy Support Group, which is based in Jackson. "We regularly have four to six families come, and we meet every other month," she says.