A Bit of Discord 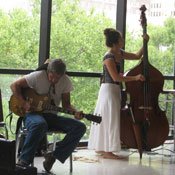 Belly dancers dancing. An upright base playing. Computer sound effects clanging. A saxophone honking. What do these things have in common? You might experience all of them at once as part of a performance of the Mississippi Improv Alliance.

I went to my first "spontaneous creative interaction," as performer daniel johnson deemed it, July 25 at the Mississippi Arts Center, and I was skeptical. How could anyone create anything that is worth watching and listening on the spot, I wondered. Wouldn't it just be total cacophony?

I was pleasantly surprised, although I must admit I heard some discord. The four pieces each consisted of various configurations of performers. The musicians used traditional instruments such as trombones, guitars, drums and keyboards, and also less common ones such as synthesizers and slide whistles. One man scraped a cymbal with a rake, and another shook his guitar violently in front of the amplifier, creating eerie noises.

The moments when the performers achieved synchronization and created something beautiful were triumphant because they had done it without practice. The moments when the sound was not as pleasing to the ear were still fun; the energy of the performance swept me away, and I was not the only one. Audience members improvised their own instruments, beating on tables and chairs along with the musicians.

johnson, organizer of the Summer Sunday and Winter Wednesday performance MIA series, explained his philosophy of improvisational art. "You're watching creators going through their process, and you're getting a chance to see how they grapple with their particular discipline and discover new things," said johnson, who does not capitalize his name.

He explained that the variation of interpretations is one thing that makes this controversial art worthwhile.

"One of my favorite things about MIA is the conversation that surrounds it," he says. "Everyone that comes to it really has their own background of their expectations about it how it hits them and how they feel about it when it's over."

For me, the performance served as a powerful reminder that art doesn't have to be over-labored or practiced, that it can occur at anytime with any object.

Those interested in participating or organizing events are encouraged to contact johnson (601-497-7454). Performances take place Sundays in July, Wednesdays in February and other times throughout the year at various venues throughout town. Check the JFP events listings for dates and times.