Dr. Viola Dacus vividly recalls one of the teaching moments that affirm her career choice of helping others develop their vocal performance.

Since making the Jackson metro home again, Jonathan Yargates has been prodigiously writing and recording new material. He also holds down the Saturday afternoon gig at Shaggy's, alongside his best ...

In her hometown of Pocahontas, Miss., Latongya Garner developed her affinity for music at Baker's Grove Missionary Baptist Church, where she currently serves as music minister.

Seth Power: Advocating for Mississippi and Celebrating Milestones in Life and Music

In the last year, Seth Power has released two albums, and multiple radio stations have played his single, “I Do.”

Brass faculty at the University of Southern Mississippi will partner with virtuoso trombonist Wycliffe Gordon to conduct a live streaming event on Oct. 29 at 1 p.m. Gordon is a ...

Determined to have a successful season, the Mississippi Boychoir has been working hard to combat the issues that COVID-19 presents, quickly adapting to a virtual platform for auditions and performances.

Robert Little, Jackson State University's new director of bands since July 1, says music is something that dwells throughout his entire family.

SPEAKing Inspiration into the Metro and Beyond

Latanya Shanks started a podcast for one simple reason. "I knew I had something to say and I wanted to say it," she said.

Music is entrenched in Jeremy Thompson's family, he says. The Jackson native said his brother and cousins used to own a studio when he was a child and that he ... 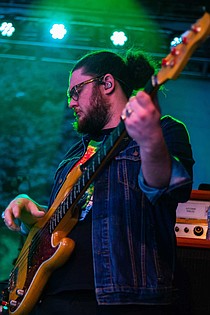 The Marcus King Band performed at Duling Hall on Monday, May 6. Here are photos ...

Ludacris at the 2017 Rhythm & Blues Festival

Flaming Lips "Do You Realize?"

Flaming Lips kick-off their world-record eighth concert in 24 hours at the House of Blues in New Orleans with "Do You Realize?".