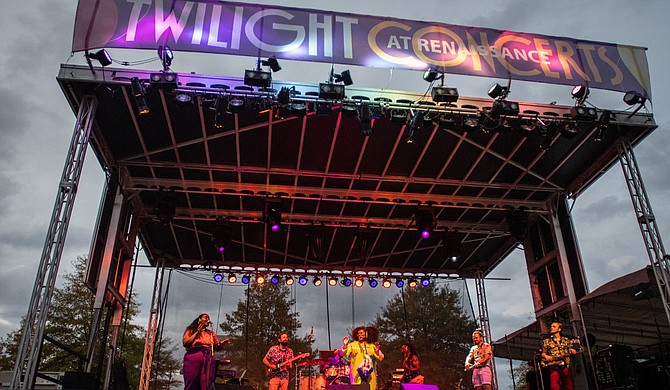 Ardenland and Wratchet Entertainment Group's first installation of the socially distant Twilight Concerts series back in November 2020 featured artists such as Tank and the Bangas. Photo courtesy Blair Ballou

CORRECTION: In the original version of this article, which is printed in Vol. 19, issue 14, of the Jackson Free Press, the JFP mistakenly listed the wrong music artist who goes by The Vamps. We have since updated the online version of the story as well as the digital flip book of the issue to reflect the proper group, and we apologize to Ardenland, Wratched Entertainment Group, The Vamps and our readers for this error.

Breaking the drought that began after concert tours around the world ground to a halt last spring and remained shuttered through the summer and fall, the Renaissance at Colony Park will play host to Ardenland's and Wratchet Entertainment Group's co-hosted Twilight Concerts on Saturday, April 24. The five-band festival marks Ardenland owner Arden Barnett's second attempt at a socially distanced concert, with a concert in November selling out. "Everyone felt safe and was elated with the way (the November concert) was handled. It was a brilliant day of music," Barnett recalls. With the lowered positive COVID case numbers and the rise in vaccinations, Barnett felt that the time was right to schedule a second show.

"It's fairly diverse programming, and there are great guest artists. It'll be a good day (to hear) a little bit of everything," Barnett says of the upcoming show.

Despite the diversity in the scheduled slate of performances, all concert goers will have to adhere to careful COVID protocols, as tickets will be sold in "pods" of four, six or eight, thus allowing attendees to control who enters their six-foot bubble. Each pod will be complete with what Barnett calls a "COVID kit," complete with hand sanitizer provided by the Cathead distillery and extra masks.

These guidelines will be enforced outside the pods, too. "We make it clear what we expect of the public and what the public can expect from us," Barnett says, noting that temperature checks and symptom-questionnaires will be conducted upon arrival. Restroom attendants will ensure the sanitization and spacing of designated bathrooms, and masks will be required in food-truck lines.

The outdoor concert is slated to begin at 2 p.m., with the artists performing into the night and the Allman Betts Band scheduled to close out the evening around 10 p.m. Tickets for a pod of four are currently available for $40 apiece and can be purchased through Ticketmaster.

The following artists are slated to perform at the festival on the Concert Green.

Headlining Ardenland's Twilight Concerts at the Renaissance, the Allman Betts band will perform songs from its latest LP, "Bless Your Heart," which is available on Spotify, on vinyl and on audio CD. Sons of two prominent founders of the Allman Brothers Band formed the group in  November 2018 after Devon Allman's dad Gregg passed away in 2017. Allman is joined by vocalists Duane Betts, Berry Duane Oakley, Johnny Strachela and R. Scott Bryan, and by instrumentalists John Ginty and John Lum. Bryan previously played for Sheryl Crow, and Ginty used his talents to support The Chicks.

G. Love and the Juice

Garrett Dutton, a native of Philadelphia, Pa., who is better known by his stage name G. Love, is currently touring to promote his 12th album, "The Juice," which features the artist's signature hip-hop blues tunes. Fans have not been treated to a G. Love album since the release of his 2015 "Love Saves the Day," and the current album also marks G. Love's first departure from his former trio, "The Special Sauce," although it does feature the musical stylings of rock 'n' roll legend Robert Randolph. Dutton started playing guitar at age 8, later adding the harmonica.

While 17-year-old singer and guitarist Brandon "Taz" Neiderauer might be young, the Dix Hills, N.Y., native brings a wealth of experience to Ardenland's Twilight Concert series, as the musician has provided instrumentals for Stevie Nicks, Lady Gaga and Slash. Self-describing his sound as "contemporary," Niederauer has lent his vocals to Andrew Lloyd Webber's Tony-award winning "School of Rock" and to Spike Lee's Netflix original "She's Gotta Have It." The talented young artist has also appeared on The Ellen Show and has performed the national anthem at Wrigley Field in Chicago—twice.

Cedric Burnside, who homesteads on several acres outside Holly Springs, Miss., tries to bring the authentic blues sounds he learned at the knee of Mississippi Delta artists to his own music, and has collaborated with fellow Mississippian musician Jimmy Buffett. Burnside describes his own tunes as "rhythmically unorthodox," but the Grammy-nominated artist has garnered a number of accolades, including four consecutive nods for the Blues Music Awards' drummer of the year and a spot on the soundtrack for the 2006 feature film "Black Snake Moan."

The Vamps, a seven-man band that’s been serenading the Jackson music scene since 1998, are set to open the Twilight Concerts. The group has weathered many storms together over the last two decades, as tenor sax player Booker Walker passed away in 2016, shortly after his retirement from the group. The band infuses these struggles and hardships, as well as their commitment to overcome them, into their signature soul-jazz covers from the late '60s and early '70s, allowing the men to remain metro-area favorites for private parties and corporate gigs. The group’s latest album, "Premier Soul-Jazz," released in 2018 and is available to stream on Spotify.