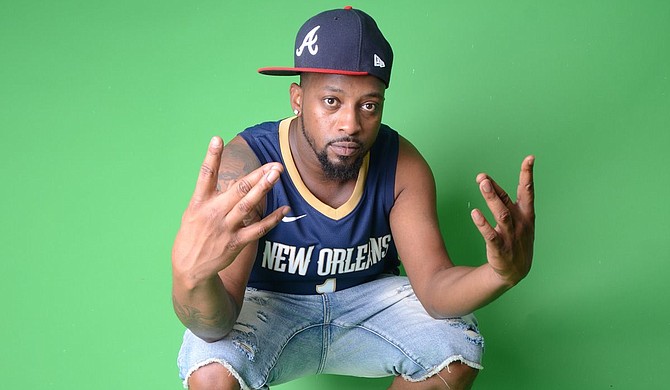 Kevin McGhee, who goes by the stage name D.O.N.O. Vegas, released “No Excuses” last summer during the pandemic. The album has since become his most popular release, and he hopes to create a spiritual successor to the album with his upcoming “Stil No Excuses,” which he plans to release this summer. Photo courtesy Joe Ellis

Kevin McGhee vividly remembers standing outside the Tinseltown movie theaters in Pearl, Miss. The bright lights caught his attention. They reminded him of Las Vegas, where the glaring lights of the city skyline interrupted the darkness of the desert. The concept spoke to him.

“When you are coming into Vegas, you are coming through the desert, and it’s dark,” McGhee says. “It’s a long, dark ride, but then when you get to Vegas you see all these lights and all this personality in the middle of nowhere. That’s how I felt about myself in relation to being from Mississippi. Nobody would expect to run into me as an artist here in Mississippi”

McGhee became known as “Young Vegas” but would later change his stage name to D.O.N.O. Vegas as a nod to his group of friends whom he hopes to bring onto the music scene as well.

“D.O.N.O was my crew who was going to Jackson State and Mississippi State. We would meet up on the weekends,” McGhee says. “I changed it because a couple of my friends wanted to do music. I was like, ‘If I change my name to D.O.N.O and the label is D.O.N.O, it doesn’t matter when they come out (because) they will have a head start on everyone else in the city.’ Every time someone mentions my name, they mention my whole team.”

Vegas learned to play both the piano and the drums as an adolescent. By high school, he had become well-known in his circle for his ability to rap. In 2013, he moved to Chicago under the influence of Chicago based producer Paris Beullerwhere he built relationships with artists and producers and learned about the music business. In 2015, Vegas was able to use his connection with Beuller to secure an opening spot on a show that headlined Lil Durk.

However, after five years, the pressure of that success brought him back to Mississippi.

“Everybody is kind of familiar with the pressure of failing, but nobody really calculates that there is pressure from being successful. Once I moved to Chicago, and I was living how I wanted to live, and the money was good, it was other stuff that turned into problems—like not being able to see my family or not being able to see my kids every day.”

The popularity that his music found up north followed him back to the South. He released his most popular album, “No Excuses,” last summer. The album quickly gained momentum and within six months had been streamed more than 1 million times on Apple Music, Spotify, Tidal and SoundCloud combined.

Presently, the 32-year-old has been preparing his next album “Still No Excuses” as a follow-up to its predecessor. Influenced by Tupac Shakur’s renowned “Dear Mama,” Vegas wrote the track “Forever Indebted” as a tribute to mothers. Another single, “Master P,” contains metaphorical comparisons between Vegas and the Louisianan music mogul’s journey through the music industry.

“I remember running into this girl that I went to Blackburn Middle School with, and I hadn’t seen her in like 10 years. We were doing a lot of catching up … and she was talking about how artists in Jackson look to Jackson too much for support,” McGhee says. “She basically was saying that all the critics don’t know what we go through or what we came from so we can’t really value their opinion. Directly after we had that conversation, I went into the studio and made the song ‘Critics.’”

“Still No Excuses” will release this summer on all streaming platforms, including Apple Music, Tidal, and Spotify. To learn more about D.O.N.O. Vegas, find the music artist on Facebook, Twitter and YouTube.