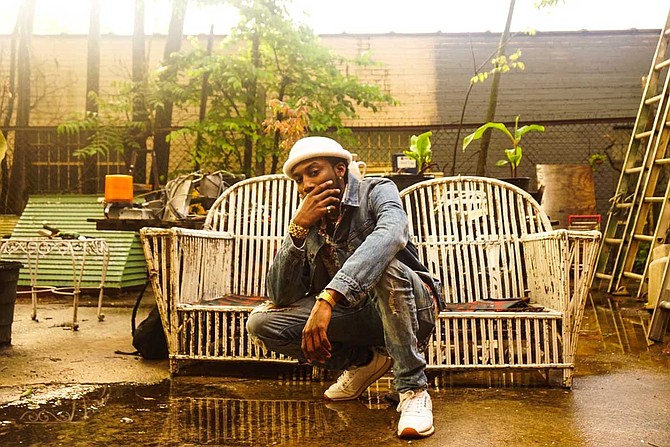 When Troop Brand was 5 years old, he led an adult choir at Mt. Calvary Church in Vicksburg in front of the whole congregation. Twenty-three years later, he performs in front of thousands. Brand, a multi-genre music artist, will perform at Offbeat in Jackson on Friday, May 3, at 8 p.m.

The Vicksburg, Miss., native got his start in music when his mother, Yolanda Troupe, who was also a choir singer, noticed her son's singing ability and encouraged him to join their church choir despite his youth.

"My mom was big on making sure I was singing just as much as she was, so she had me in every choir practice and had me singing," he says. "And I guess they were just like, 'Let's have him lead a song.'"

As he got older, Brand joined the Mississippi Boychoir—an opportunity that expanded his classical training and allowed him to perform internationally as the group toured places such as London, United Kingdom, Amsterdam, Netherlands, and the Czech Republic by the time he was only 13, he says.

Brand attended Mississippi State University for three years before transferring to Morehouse College in Atlanta, Ga., in 2013, where he spent the next two years studying drama until he earned his bachelor's degree in the subject in 2015. While in college, Brand began producing his own music.

In 2014, he won the "Artist Ready to Blow" award at a rapping competition that Atlanta-based Patchwerk Studios held. For the event, music producer Symbolic One, or S1 (who produced Kanye West's song "Power"), created a beat that participants had to rap over for 24 bars (a measure of music). As the winner, Brand had the chance to meet him and receive a few beats to incorporate into his own music in the future. Brand is still holding onto the beats, he says, waiting for what he feels is the right opportunity to use them.

After releasing singles such as "Riddle Me That" and "Indeed," Brand acquired enough recognition that he got opportunities to tour with hip-hop artist Pell, and to collaborate with Wheezy and The Far East Movement.

"It's definitely a road that you have to take (as an artist)," he says. "(The experiences) opened up doors. ... They really helped me become more immersed in the music scene."

His music combines elements of R&B, hip-hop and pop, while also featuring a type of country-leaning rap that pays homage to his southern roots. A proponent of live production, he employs the sounds of live guitar, live saxophone and trap-styled percussion. Troop co-produces the songs with Atlanta-based music producer Professor X.

His most popular song is "Indeed," with more than 500,000 monthly plays on Spotify. The track also serves as Brand's personal favorite of the singles he has released so far.

"It's got such a groove," he says. "It just makes me feel like I'm chilling on a beach somewhere. The vibe is smooth and soulful, and it really hits home. I love that song."

Currently, Brand is one of seven artists who is part of a tour called "Finesse, No Stress," alongside Kaleb Mitchell, Itsjustmue, Keenon Rush, Just John, Wow Eli and Josias.

As part of the tour, Brand and his friend and fellow artist Flywalker, who is based in Jackson, will be hosting beat battles after the main performances. People can register ahead of time to participate in these beat battles on stage, where they will compete for prizes like studio-session time and money.

In addition to the tour, Brand is also finishing up his first album, "Carpe Diem," which he will release May 31. The album will include a number of his pre-existing singles as well as new tracks such as "Lituation" (a play on "lit" and "situation"), which Brand says is the one to anticipate.

"It's more of a party-type song, more of a have-a-good-time, go-out-and-enjoy-life type of song. It's a feel-good, have-fun song," he says.

Troop's drive to make his music the best it can be occasionally leads him back into the studio to make edits.

"I'm one of those artists that has to be stopped from going back into the studio to make changes," he says. "I'll listen to something, and I'll listen to it, and my team will think it's done. Then a month later, I'll be back like, 'Alright, we need to change this. We need to change this.' And they're like, 'No! Troop, it's done. We thought it was done,' and I'm like, 'Nah, nah, it's not done yet. We gotta change it.'"

Eventually, though, he gets to a point where he is happy with the results of his and his team's labor.

"I just have to get to a point where I'm like, 'Alright, it's good. I need to chill out. I need to just relax, not touch it anymore—just let it go; let it breathe.' And I think I finally got to that point. It just took a while."

Troop Brand will perform tonight at Offbeat (151 Wesley Ave.) as part of the "Finesse, No Stress" tour. Tickets are $10. For more information, find him on Instagram, Facebook and Twitter, and listen to his music on Spotify.