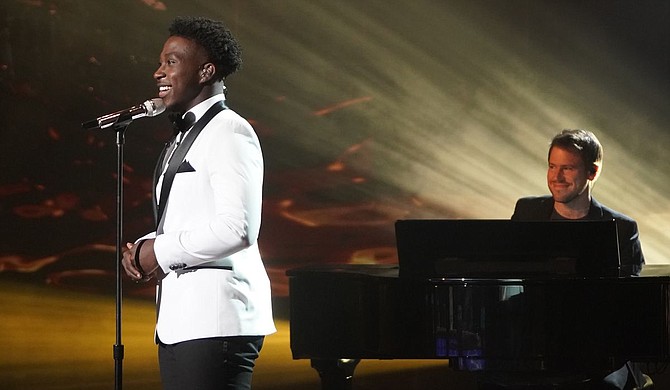 Deshawn Goncalves, who presently studies music technology and performance at Jackson State University, placed in the Top Nine of the 2020 season of “American Idol,” in spite of personal challenges. He is now recording a debut album with industry leaders and has several shows in the works. Photo courtesy Deshawn Goncalves

The sun was beaming down on Deshawn Goncalves in the middle of marching band practice at Jackson State University when he got the call to audition for “American Idol.”

“I got an Instagram DM from a casting producer, and they wanted me to come out and to do an audition,” he says.

The Youngstown, Ohio, native had originally been scheduled to audition for “America’s Got Talent,” but the show ended up temporarily shut down due to the pandemic.

“(‘Idol’) was a better fit for me anyway because I could still showcase my artistry with the piano, so it worked out perfectly,” says Goncalves, who began singing in the church choir under his grandmother’s direction at 4 years old.

As Goncalves grew up, he developed a deep love for music. He began playing the trumpet in sixth grade, learned the piano in seventh grade, and joined the school’s drumline by eighth grade. His band director, a Jackson State alum, told Goncalves about the university’s famed Sonic Boom of the South.

Goncalves earned a full academic scholarship to JSU and is currently majoring in music technology and performance. He plays sousaphone for the award-winning Sonic Boom marching band.

After that initial contact, he flew out to Atlanta for the first audition for “American Idol,” then returned home to Ohio where he continued his classes online due to the pandemic. There, he went through a series of auditions on Zoom before performing the televised in-person audition that the world saw.

Joined by his mother, Goncalves traveled to Los Angeles for the live audition where they, along with other participants, were isolated at a hotel. Being in the midst of other talents, the 20-year-old wondered if his artistry and talent would be received and celebrated the way he intended.

“I was surrounded by so many other singers. It was nerve-wracking in a sense because there were so many other talented people there as well,” he says. “Going into my audition, I just had to keep reminding myself to be myself and just do the best that I could, and it really worked out for me.”

Goncalves faced personal challenges while filming the show. Amid the daily rehearsals, vocal coaching sessions and choreography practices, Gonclaves endured the loss of an aunt and a grandmother.

The requirements of the show forced Goncalves to have limited time with his family in both cases, and the college student ultimately chose to not share his grief while the season was on-air.

“It was a lot of emotional distress to say (aloud) while going through the show, and I never really shared that,” he says. “Although it was a part of my life, I didn’t want everyone to know everything.”

A favorite among fans and judges, Goncalves belted melodic tones each week, mostly while seated at the piano, and he made it into Idol’s Top Nine before low voter turnout ended his run on the show.

During his final performance on Disney night he sang “When you Wish Upon a Star ‘’ from the movie “Pinocchio,” and he then returned for the season finale where he sang “Sweet Thing” alongside 10-time Grammy Award-winning artist Chaka Khan.

“I (now) know what’s possible for myself,” Goncalves says. “The fact that I got through those things while going through this show on this national stage was just amazing to me. It’s sort of been a recurring theme in my life—being dealt a hand that was very challenging and just having to toil through it the best that you can. I was just really proud of myself for just getting through everything that I did.”

Since “American Idol,” Goncalves has been working with industry leaders to record his debut album, along with some Broadway appearances.

He plans to release a single titled “Dreamer’s Anthem” in the near future and has several planned shows in the works.