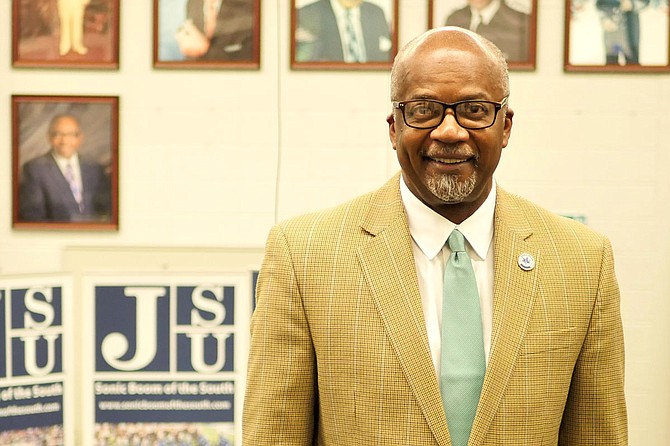 Belzoni native Dowell Taylor, 64, is once again the director of bands for Jackson State University and an inductee to the National Black College Alumni Hall of Fame.

"I actually came out of retirement to reassume my old position," he says. "I love the institution. I love the people. I love the students. I love seeing them grow and develop into professionals."

Taylor's love for music started around 12 years old when his father, Rev. N.C. Taylor, brought a used piano home. From there, he says his love grew with his eighth grade band.

As one of 22 children, he played the tuba in eighth grade at Powell Middle School because his parents couldn't afford to buy the trumpet he wanted. But it worked out, Taylor says, because his future wife, Vivian Taylor, was also in the eighth-grade band.

He then worked as the director of bands at Kentucky State University and took a leave of absence to study at the University of Cincinnati's College Conservatory of Music. He did not complete his doctorate because he returned to JSU to work.

After a 20-year absence from the band program, he came back in 2012 as the director of bands and assistant professor of music technology. In 2015, he retired again after working at JSU for 30 years. However, his retirement did not last long, as he became director of bands again in 2017.

This time around is slightly different for Taylor. His role has morphed into more of an administrative one.

"I'm sort of the navigator," Taylor says. "I'm ... guiding the process, budgeting, trip planning, purchasing and giving out job descriptions, assignments, duties, (monitoring and advising half time performances), things of that nature for the entire staff."

During Dowell Taylor's induction into the National Black College Alumni Hall of Fame on Sept. 28 in Atlanta, he will be inducted alongside former football player Jerry Rice.

"It actually means that all of the hard work and energy and time spent on trying to do the best in your career is being validated, in a sense of speaking," Taylor says. "It's not just for me, it's also for all of the students whose lives I've touched. Jackson State University. It's for my family. It means a great deal."