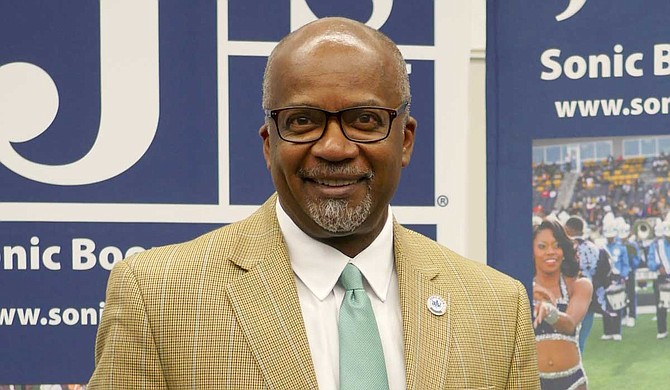 At the Aug. 20 city council meeting, the council recognized Dowell Taylor with a resolution for being a world-renowned musician and for his leadership.

Taylor was a member of Jackson State's "Sonic Boom of the South" marching band in the tuba section, and he arranged more than 100 selections, including JSU's theme, "Get Ready," which John Paul Jones originally arranged. Former director Harold Holten Sr. also honored him with the W. W. Davis All Around Bandsmen award.

The 1990 band performances at Motown's 30th anniversary celebration in Hollywood, Calif., and the 1991 NBA All Star basketball game in Charlotte, N.C., are some of the band's biggest accomplishments.

On April 1, 2012, Jackson State appointed Taylor the director of bands for a second time, after originally naming him to the position in 1984. His ingenuity led to two-page cover of the band's pre-season camp in ESPN magazine, a CNN Special on the "Morning Express with Robin Meade," the American Journey that focused on the journey of becoming a member of the "J5" Drum Majors and The Honda Battle of the Bands showcase of eight of the top bands in the nation.

Since retiring in 2015, Taylor has dedicated his resolution to a person who knows him best, he said.

"This person has witnessed my failures, celebrated my achievements, and supported me in both the good and the bad times. It's not easy being a band director's wife, but she's been my friend confidant, advisor, counselor and disciplinarian. I'm proud to dedicate this award to my wife of 43 years, Dr. Vivian Taylor," he said.