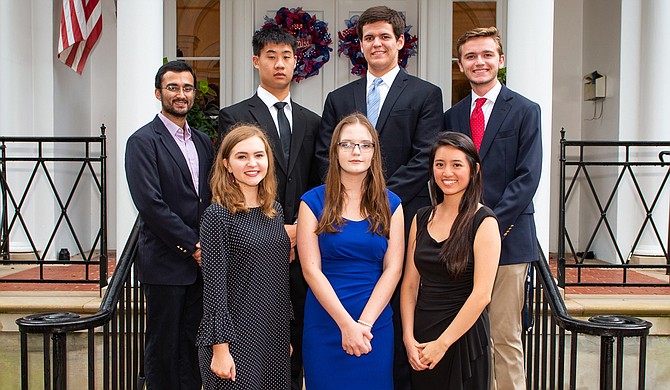 The University of Southern Mississippi held an official dedication and ribbon-cutting ceremony for its new Joe Paul Student Theater on Saturday, Sept. 8, in the Thad Cochran Center on the Hattiesburg campus.

The theater is a 9,000-square-foot, 324-seat stadium-style cinema and auditorium, named in honor of former USM Vice President Emeritus for Student Affairs Joe Paul, who retired in 2015 after 40 years of service.

The Student Printz, USM's student-run newspaper, reported in April 2018 that the theater features a 31-foot screen, state-of-the-art digital cinema projectors and Dolby surround sound. Student organizations, departments and other groups can pay to rent out the space for keynote presentations, panels, small entertainment acts and other events.

The theater will also be equipped to live stream video and audio to other rooms in the Thad Cochran Center in the event of overflow or Internet-based content.

Florida resident Roe Stamps, co-founder of Boston-based private investment company Summit Partners, established the Stamps Family Charitable Foundation with his wife, Penny, in 1986. The foundation launched its scholarship program at the University of Michigan and Georgia Institute of Technology in 2006, and now has nearly 40 partner schools.

Jackson State University will induct 10 former student-athletes and a student-athlete supporter into the institution's 2018 Sports Hall of Fame class on Friday, Sept. 28, at 6 p.m. at the Lee E. Williams Athletics and Assembly Center. This year's inductees come from sports such as basketball, football, softball and golf.

Kevin Dent played as a safety for the JSU Tigers football team from 1985 to 1988. He led the nation in pass interceptions as a sophomore. He was a three-time All-American athlete over the course of his college career, after which he spent short stints in the NFL, World Football League and Arena Football League. He was inducted into the national College Football Hall of Fame in 2006.

A.J. Montecinos was a four-time SWAC champion golfer during his time at JSU and has since had a successful career as a caddy. He caddied for South Korean professional golfer Yang Yong-eun, helping him earn a PGA Championship win against Tiger Woods in 2009.

Narah Dean Oatis became the director of the Sonic Boom of the South's Prancing Jaycettes, which are now the J-Settes, in 1975 and also worked with JSU Twirlers and cheerleading teams. The Department of Athletics presented with Oatis with the Award for Dedicated Service in 2008 after her 32 years with the university.

Former star basketball player Tera Sheriff was a leader in scoring for JSU in the 1994-1995 season, with 653 points. That season, she also helped the team advance to the SWAC Championships and the NCAA tournament. Her daughter, Lauran Sheriff, currently plays for the Mississippi College Choctaws.

John Walker was a linebacker, tight end and center, who lettered all four years at JSU. He initially planned to play in the NFL but changed his goals after the U.S. Army drafted him in 1968. He decided to become a coach after serving on active duty.

LaTrenda R. Watson was a four-year letter athlete in softball for JSU. In 1999, she earned SWAC honors such as All-Tournament, the Eastern Division's Most Outstanding Hitter, and Player of the Year.

Rickey Young is a Mobile, Ala.-native running back who found success on the field for JSU despite sharing a position with football legend Walter Payton. He went on to play in 131 games over nine seasons in the NFL from 1975 to 1983, rushing for nearly 4,000 yards and 23 touchdowns.

Eric Strothers was an assistant basketball coach for JSU, whom College Insider named as one of the best mid-major NCAA Division I assistant coaches in 2009. A year later, he earned the title of SWAC Assistant Basketball Coach of the Year.

Tickets to the JSU Sports Hall of Fame are available from the university ticket office. For more information, call 601-979-2420.