‘The Ripper Gene,’ a Serial Comic about Serial Killers in Mississippi 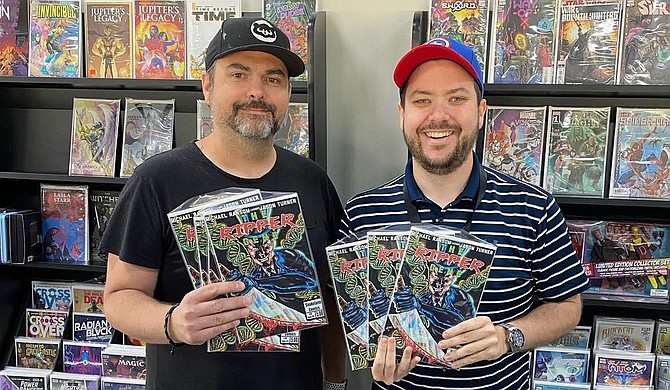 Music and graphic artist Jason Turner (left) poses with Travis Ryder, co-owner of Van’s Comics, Cards and Games in Ridgeland, Miss., which offers issue #0 of “The Ripper Gene,” a comic series based on a mystery novel of the same name. Photo courtesy Jason Turner

Jason Turner has long made a name for himself in Jackson and the southeast region as a music artist who performs in venues all over with the Jason Turner Band. This year, the music artist has tapped into his passion for visual art to collaborate with Michael “Ted” Burczynski, pen name Michael Ransom, to create a serialized comic of the latter’s debut novel, “The Ripper Gene.”

In the medical thriller, Burczynski uses his knowledge of cutting-edge genomics techniques to relay the story of Dr. Lucas Madden, a neurogeneticist-turned-FBI agent from Mississippi who applies a controversial genetic approach to behavioral profiling as he pursues the Snow White Killer in the Mississippi Delta following the disappearance of his former fiancée, which leads him to uncover a possible connection to the unsolved murder of the investigator’s own mother during his youth. 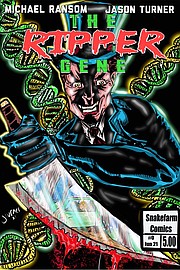 Over the summer, the pair produced an 11-page, black-and-white issue #0, which covers the prologue portion of the novel, with canonical bonus scenes to highlight events previously not depicted in the original story.

Turner grew up in Jackson, Miss., graduating from Forest Hill High School and enrolled in Hinds Community College in Raymond, first to study music before changing his major to graphic design. He lived in Nashville for a few years before returning to Mississippi around 10 years ago.

A native of Corinth, Miss., Bercynzski graduated from Corinth High School and then went on to Mississippi College in Clinton, where he studied chemistry. His educational pursuits led him to later study English literature at University College London, creative writing at the University of Idaho, and finally the University of Pennsylvania School of Medicine, from which he graduated with his doctorate in pharmacology and toxicology.

Both creatives, who each had shelvesstacked with statues of comic-book superheroes and other characters, behind them during the joint Zoom call, spoke with the Jackson Free Press about “The Ripper Gene” and their collaboration.

JFP (to Turner): Can you give more on your artistic background?

Turner: My dad, he was a comic collector. At 3 years old, he handed me Spider-Man and Batman (comics), and I was mainly hooked. I have artwork from when I was 4 or 5 drawing Spider-Man and Batman. My mom kept it. When I was in sixth or seventh grade, a kid from my class handed me Todd McFarlane’s “Spider-Man” and stuff from Jim Lee and Rob Liefield, who started Image Comics in the ’90s.

From there, I became obsessed with drawing. It’s something I’ve wanted to do my whole life. For a while I compared myself to those (comic-art) greats, but then I finally realized many artists, particularly indie artists, are doing their own thing and not even worrying about these guys. I was like, “Okay, I have my own thing.” So, about 10 years ago, I started promoting and putting my art out, and I’ve had a really good response.

JFP (to Burczynski): Can you tell me a bit about why you chose to set ‘The Ripper Gene’ in Mississippi, specifically?

Burczynski: For one thing, it’s what I know, where I grew up. But the germ of the novel—which is also in (issue #0), and Jason has done a beautiful job capturing it—is the prologue showing the background of the childhood of the main character.

A similar incident without a fatal outcome happened to me as a kid one Halloween night in northern Mississippi. So I knew that was where the backstory took place. I knew that I knew Mississippi and New Orleans pretty well, so I decided to set the story there and be familiar and comfortable describing the setting down there.

JFP: What intellectual ideas or themes do you present in the novel for your readers to ponder and think about?

Burczynski: I think the theme throughout the book is really the origin of good and evil. Are serial killers made, or are they born? I was really intrigued by the idea that if somebody is born with alterations in their DNA that predispose them to violence or flights of behavior, then they are kinda at a disadvantage from birth when it comes to choosing good or evil.

JFP: This book is set in Mississippi, which is a largely religious area. How much does religion play into that question of good and evil, nature versus nurture?

Burczynski: I am a pastor’s son, and in the novel you could argue that the protagonist is modeled after what I know. The protagonist, while an atheist at the onset of the novel, his father is a pastor, and they have a series of interactions and conversations comparing and contrasting a religious view of good and evil versus (Lucas’) more scientific view of good and evil.

JFP: Can you elaborate on which aspects of the novel were inspired by experiences from your own life?

Burczynski: I kind of stole my own thunder, but I’ll tell you a little bit of a funny story. In the prologue, there are some trick-or-treaters going down a country road who come across some scary-looking fellows. Up to that point, that’s exactly what happened to me and a bunch of kids that were trick or treating with my mother and another lady in the car. My mother, however, is a no-nonsense lady. She stepped on the gas. The prologue plays into what could have happened if the lady stepped out. The rest is all very much fiction.

JFP (to both): Can you tell me a bit about how you two became acquainted and how the idea of retelling “The Ripper Gene” as a serialized comic came about?

Turner: Ted’s brother and me were best friends for 25 or so years. He was the first bass player I had. It was actually his idea to start the Jason Turner Band. He recently passed away in January.

Ted knew I did comic-book art, so he reached out to me and said we should do this comic. For the lead character (Dr. Lucas Madden), I modeled the adult version after my friend Andy (Burczynski), Ted’s brother, and my brother, too, you know, the big brother I never had. So it is a special thing we are working on here creating this comic.

Burczynski: To add to that, after Andy passed away, I’d realized in the back of my mind that I always hoped Andy and I would collaborate on something like this. That wasn’t available anymore, but I thought to myself, “Jason is a talented artist.” I didn’t know if he was already pulled into a project, but I told him about “The Ripper Gene,” and he was interested, and I’m thrilled that he is the illustrator for this now.

JFP: The comic says that it is from Snakefarm Comics. Is Snakefarm something that you two created?

Turner: Andy’s (nick)name is Snakefarm. … (We knew) we needed to put out this prologue soon. I was working on the cover and just put Snakefarm Comics up there and asked Ted, “What do you think?”

Burczynski: I loved it. To keep him part of this project, that’s the name for the company we’re coming up with here. It’ll be founded on the “Ripper Gene” serialization, but hopefully there will be other comics to come.

One thing that’s really cool is that Jason and I are adding scenes that you don’t see in the novel but are canon. The novel is in first-person from the main characters’ perspective.

Jason is already illustrating a scene (in issue #0) that isn’t shown in the novel because the young detective could not have seen this scene happen off-screen. It’s hard to predict how many issues it’ll take to cover all the events of “The Ripper Gene” because there’s a lot we’re going to put into the comic that wasn’t on-screen in the novel.

I’ve always heard that everybody who reads (“The Ripper Gene” novel) thinks it’s very cinematic, so I think with Jason’s illustrations, letting people see events unfold in a storyboard fashion is only going to help.

Turner: To lead it back to Andy, we put this comic out ourselves, and my immediate thought at first was, “Oh man, we should send this to all these comic companies.”

But I remembered that Andy was always into the idea of DIY, even with music when he used to tell me, “Man, you should just put out music yourself. You’ve got the internet now; you don’t need companies.”

One day it just hit me in the car, and I texted Ted, “You know what, Andy always said ‘Do it yourself.’” So that’s where we went with this.

JFP: Is there anything else that either of you want to put out there before we close?

Burczynski: It’s been really amazing for me as a writer to have written the novel and know what’s in my head about that night (the scene depicted in the prologue issue) and then to see how Jason portrays it, and he’s done so well. His artistic illustrations really match the tone and theme in my writing, so I think it’s a nice match between him and me.

Turner: Andy had told me for years that his brother was a scientist and that he had written a novel, but I never had a copy. So in getting it (in preparation of illustrating the comic) and reading just the prologue, I didn’t even get beyond that before I was like, “This is so cool.”

Growing up and playing music in Mississippi, I have driven down nearly every Delta backroad in this state, so I could just see this scene of trees and bushes and these three kids in the middle of the road with blood on them. Now, drawing pages where this character resembles my friend and Ted’s brother, it just has a cool, thriller vibe, and it’s exciting to bring those things to life on the page.

The first full-length, fully colored issue of “The Ripper Gene” (comic) releases Oct. 31, 2021. Copies will be available for purchase online at either jasonturnerband.com or michaelransombooks.com, and in-person at Van’s Comics, Cards & Games (731 S. Pear Orchard Road, Ridgeland). Issue #0 is available at Van’s and through contacting either creator on social media. The novelization is available through Ransom’s website or other online retailers. For updates on the comic, which the pair estimate may publish for up to 12 issues, find The Ripper Gene Comic on Facebook.