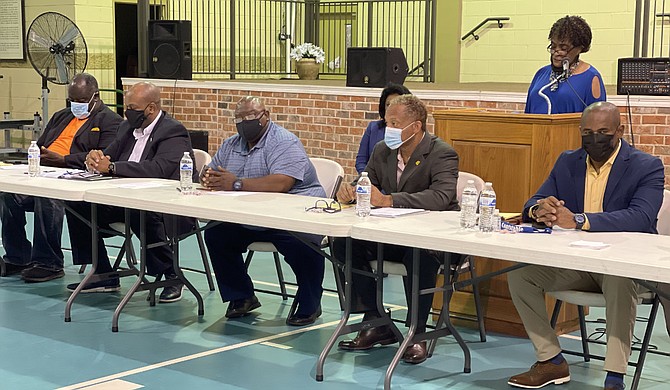 A cross-section of attendees spoke at a forum for Hinds County District 5 constable candidates on Tuesday, Oct. 12. Photo by Kayode Crown

Candidates running for the Hinds County District 5 Constable position at the Nov. 2 special election attended two recent, separate forums to jostle for votes. Bennie C. Buckner resigned from the post in August, and the Hinds County Board of Supervisors appointed Demario E. Benson in the interim on Aug. 16. The district includes portions of west Jackson, Old Byram, Chapel Hill, Terry and Utica.

Who Are the Candidates?

Juan Cloy attended Jackson State University, where he earned a master's degree in criminology, and worked 26-and-a-half years in law enforcement as a police officer, mainly with the Jackson Police Department, in addition to his 10-year stint with the FBI. Through his nonprofit, Justice Training Institute, Cloy and other law-enforcement professionals train police officers to have a harmonious relationship with the public through courses on implicit bias, human diversity and police relations, police leadership and police ethics, among other classes.

Timothy J. Myles is a graduate of Utica High School and has been in law enforcement for 31 years, serving 21 of them as chief of police in Utica. Benson is a pastor at the Pratt Memorial United Methodist Church Jackson, Miss.

A former defensive end for the Jackson State Tigers before having an NFL career with the Buffalo Bills, White worked in criminal and civil investigations for 30 years before he retired in 2016. He presently volunteers with the Hinds County Board of Supervisors. Gray has been in law enforcement for 29 years and is pursuing a master's degree in criminal justice from the University of Mississippi.

Marlow Stewart is a graduate of Alcorn State University with a bachelor of science and educational psychology and worked for the Mississippi Department of Corrections for most of his law enforcement career as a probation/parole officer. He retired as a regional director. He is a veteran of the United States Navy.

Green has been a detention officer at Hinds County Sheriff's department for over 11 years serving as a booking clerk, sergeant, and lieutenant. Manuel is a retired high school chemistry teacher, after which he became a Hinds County deputy sheriff. He was the pastor of New Bethlehem Missionary Baptist Church, Thornton, Miss., and Truelight Missionary Baptist Church, Yazoo City, Miss.

Candidates on Their Approach if Elected

Young Democrats of Mississippi Vice President Lawren Long asked them about how they will "keep the peace" and function as constable.

Juan Cloy said that he will strive to keep the peace through conflict-resolution training and by serving the public to the best of his ability. "If I can assist in any way, shape, or form with an apprehension of a suspect, that's keeping the peace," he said. "If I can assist individuals with domestic-violence training, with what I did with the Mississippi Department of Corrections’ youth offenders unit with teaching those young men that were put in prison how to build character, to have more empathy, that's keeping the peace."

Timothy Myles said he seeks the position of constable to broaden the scope of people he is able to serve, from the fewer than 1,000 people who live in Utica to the more than 40,000 residents within all of District 5. He said that he will work to diffuse volatile situations, using the skills he developed over the course of his career, such as being a good listener, to accomplish this goal.

Demario Benson said being a constable is an extension of his ongoing care for the community. He aims to connect the needy with resources and asserts that the works of a constable lie beyond having law-enforcement skills.

“It's more so about the fact of being able to go out and serve the people with dignity and integrity, and making sure that you are the public servant that you were elected to be," he said. "And that's what I will continue to do as your District 5 constable."

Larry White said he will execute the task of the constable faithfully, from keeping order in the justice court to seeing subpoenas. “You would have to make sure that if you are interacting with the general public at large, you do it in a way that is not offensive," he added.

Juan Gray said he wants to be a constable as a platform for helping the homeless population and that there is a need to practice community policing. He committed to the practice of compassion, sympathy, empathy, listening to people and developing a relationship with the community. "If I'm successful in being elected, I would like to be that visible person in District 5," he said. "I want people to see me out there; I want them to see me every day in different neighborhoods, not just my own."

“I want them to know that their constable is there, not just when it's time to serve papers or to make an arrest," he added.

Marlow Stewart said that as a constable, he will go around meeting people in the community. "We need to stop the problem before it becomes a problem,” he said. "And the way to do that is to get out, speak to (the) youth. You deal with the youth."

"I would like to use my connections in the community with our judicial system, the law enforcement, the mental-health aspect of it, to bring on a new vision of a constable," Stewart added. “My background in corrections as a probation and parole officer has put me in a very unique place, just based on how the job has to be done and pretty much how you have to communicate with everybody around.”

The next day, after the Facebook live event, about 20 people had gathered at St. Luther Missionary Baptist Church Family Life Center in west Jackson by 6 p.m. on Tuesday, Oct. 12, to listen to six candidates for Hinds County District 5 Constable share their vision for the office and sell their candidacy. Beverly Wade Green and Levelle Manuel did not attend the event. Green told the Mississippi Free Press afterward that she could not make the forum due to work obligations. When Mississippi Free Press reached out to Manuel, he said, "I don't feel like talking,” and hung up.

The Hinds County Democratic Executive Committee and the church co-sponsored the event, opening it to the public to promote voter education and to provide exposure to the candidates and the role of county constables. Organizers billed the event as a way to encourage voter participation in the election.

"The Forum seeks to encourage voter participation in our local, state and federal elections," the committee said in an Oct. 4 press release. "Stimulating the interests of the voters regarding issues affecting their families and communities through dialogue and exchange is a critical element of this Forum."

Hinds County Democratic Elections Commission Chairwoman Jacqueline Amos said in an interview with the Mississippi Free Press after the forum that citizens need to understand more about the role of the constable. She also lamented such low turnout at the event, which to be fair, happened during a pandemic. By the end of the evening, the number of attendees had grown to only 20 or so, roughly.

"The most disturbing thing for me is the fact that this center should actually be, you know, full of people," she said. "There should be more people here.”

"We did get the word out—it was publicized. But I think we are stuck in this mindset—if it's not a presidential race, or if it's not a gubernatorial race, then it doesn't matter as much," she added. "But it does because it affects us personally."

What Do Constables Do?

Amos argued that the constable position should attract greater attention because it is close to the people as the number-one law enforcement officer and the go-to person in a district.

"The responsibility and duties of the constable get overlooked," Amos said. "They are an important piece to the law-enforcement agency in each individual district."

Amos said as the Mississippi National Democratic Committeewoman, she will continue to try to get people electorally engaged.

"We've got to try to encourage people to become more involved," she said.

Hinds County Democratic Executive Committee Vice Chairman Nathan Shrader also commented on the low turnout. "I would say today's event is important because these local elections, these races have a greater impact on people's day-to-day lives than most of the national political campaigns," he told the Mississippi Free Press at the event.

"The other important thing is you can see the direct impact because you live in the community," Shrader said. "And that's where I think it's so vital to have people turn out to hear these candidates and go vote."

"In my mind, the highest turnout should be the races for constable, for sheriff, for city council when those happen, because those are the elections that are the closest to the public, where you live in your community," he added. "Those are the people that you're going to depend on the most."

"And one of the things that's a tremendous frustration for me is oftentimes the low turnout in the elections for the local offices."

Shrader, who is also the Millsaps College Department of Government and Politics chairman, explained that the constable is the face of law enforcement in the district.

"So you think this is the person who is going to be there to provide critical support also for the other law-enforcement agencies," he said. "That's something I think has got to be remembered: that they're not operating just in a vacuum.

"They're accountable to all these other law-enforcement agencies in the region, too."

Hinds County Democratic Executive Committee Treasurer Bill Chandler was at the event. As the Mississippi Immigrant Rights Alliance executive director. Chandler said he is concerned about the constable position because of the possible impact the election could have on immigrants' rights.

"They need to be conscious of the rights of immigrants regardless of immigration status, and that's the concern," he said in an interview after the forum. "A lot of the law enforcement has been abusive towards immigrants, and not just Latinos."

"Obviously, you see what's happening to the people from Haiti at the border patrol. And I used to live on the border. Border patrol has always been a vicious organization. So law enforcement is a concern to us because of the potential for abuse of people."

Mississippi Code § 19-19-5 explains the roles of the constable.

The Mississippi Constitution says that every constable should keep and preserve the peace within their county, report violations of the penal laws of which he is aware, and work with the justice court to "return all process, civil and criminal, lawfully directed to (them)."