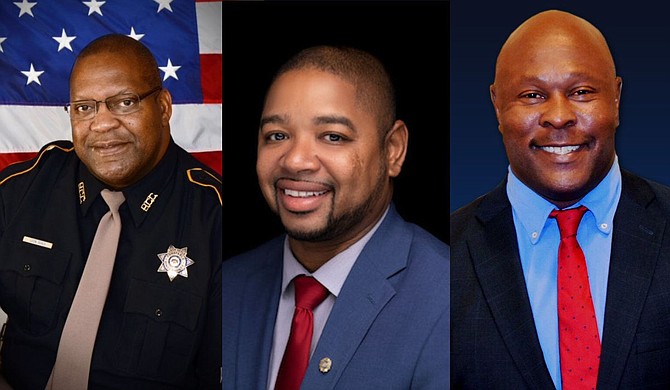 The winner among the three candidates and 10 others profiled here, here, here, and here will fill the position opened by the death of former Hinds County Sheriff Lee Vance, who died in August after testing positive for COVID-19.

Leon Seals, 57, is a native of Baton Rouge, La. Football Coach William C. Gorden recruited him to play for Jackson State University, and the Buffalo Bills drafted him in 1987. Seals is now the Hinds County District 5 Constable.

"I played eight years in the league with the Bills and New England Patriots before returning to make Hinds County my home," Seal wrote in a Sept. 24 statement to the Jackson Free Press.

He wrote that he has over three decades of law-enforcement experience. He obtained a bachelor's degree in criminal justice from Jackson State University and went on to graduate in 2000 from the FBI Academy Graduate of the FBI National Academy, Quantico, Va.

He said that his focus as Hinds County Sheriff is restoring confidence to all Hinds County residents and businesses.

"We know the increase in crime has caused many residents to move out of Hinds County, impacting our tax base and economic development," he added.

He said he will work to remove the county jails from the Department of Justice's consent decree and increase officers' visibility.

"(One of my priorities is) establishing a mental-health team within the Department to ensure detainees receive the assistance needed to decrease recidivism, providing soft skills training, education, and programs for detainees," Seals wrote. "I am passionate and committed to being tough on crime. I am highly experienced, trained, and prepared to lead the (Sheriff's) Department."

Caston, a lifelong resident of Hinds County, is a Jackson Police Department officer. He is a graduate of Callaway High School, Hinds Community College and Jackson State University.

In an email statement to the Jackson Free Press on Sept. 15, Caston wrote that as the sheriff, he will expand assistance to the JPD and will focus on reducing violent crime in Jackson by concentrating on individuals violating the National Firearms Act. He also said he will work toward increasing sentences for "gang members."

Mayfield came from Chicago to Jackson State University in 1989. He played football there, graduated in 1994, and taught in schools in Jackson and Yazoo.

He is currently a Jackson Police Department officer working as a precinct 2 patrol officer, traffic officer and JPD recruiter. He was previously Town of Edwards Police Chief for three-and-a-half years and left in 2018.

Mayfield’s priority as sheriff will be leading by example and getting a functioning jail for the county, he told the Jackson Free Press in a phone interview last month.

The Hinds County Detention Center in Raymond is under a consent decree for civil-rights infractions.

"I have firsthand experience saying that we don't have a place to put people who run afoul of the law. We have to 'field release' them," Mayfield said. "Field release means that we give them a court date for later on, down in the future."

"If I give you a sheet of paper saying that you have to report to the court to be convicted of a crime and then be put in jail, you have to ask yourself a question: Is the person going to respond and show up to court? And 99.9% of the time, the answer is going to be 'No.' So you have to secure an adequate facility to place people in jail."

The candidate said that only those accused of "classic felony murder or aggravated assault with a weapon" are jailed in the county.

"The misdemeanors, they still need a place to be locked up until they've been brought in front of a judge," he added.