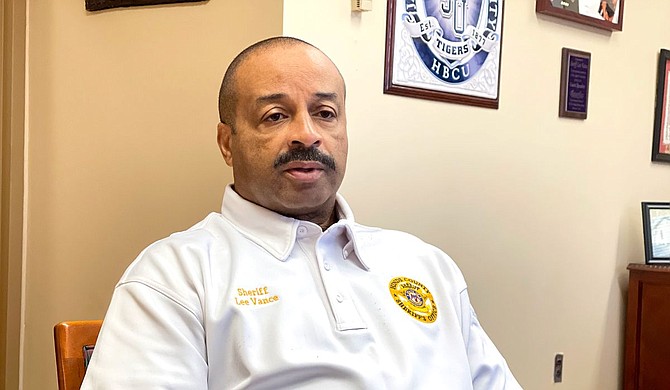 The burial ceremony for late Hinds County Sheriff Lee Vance was held at the Mississippi Coliseum in Jackson, Miss., on Saturday, Aug 14, 2021. Photo by Kayode Crown

Friends, family and associates of Sheriff Lee Vance, along with local leaders, gathered at the Mississippi Coliseum on Saturday, Aug. 14, the Jackson native’s burial ceremony. Vance died Aug. 4 at home after testing positive for COVID-19.

Former Jackson Mayor Tony Yarber joined speakers who shared their memories of Vance. Yarber, who was mayor from 2014 to 2017, related why he had appointed Vance as police chief in 2014.

"He brought a wisdom in the room that gave us the ability to know that whatever he said to us, whether we liked it or not, that we could be assured that it was the best advice in the room," Yarber said at the ceremony Saturday. "He was the best political decision that I ever made."

Yarber urged others to emulate Vance's example of dedication and collaborative attitude. "I said on TV the other day that you honor giants with giant movement," Yarber continued. "I don't want you to (merely) say you're a friend of Lee's," but don't display his public-service attitude.

Vance also served under Mayor Chokwe A. Lumumba, who defeated Yarber in 2017, but retired from the position in late 2017 before running for and winning the sheriff’s job in 2019.

Lumumba remarked at the memorial that Vance displayed love while he was alive. "He was the embodiment of what it means to love one another," Lumumba said. "He had one of those unique spirits that made us all feel connected to him."

Two days after the burial ceremony, the Hinds County Board of Supervisors appointed Marshand Crisler, 52, as interim Hinds County sheriff until the election on Nov. 2, 2021, but not without mild drama.

McGowan later introduced the motion for Crisler to be the interim sheriff. Calhoun and Gavin voted in support. Graham and Archie abstained.

Crisler was police chief of Utica, Miss., from 1999 before an eight-year stint as Ward 6 Councilman from 2001 until 2009. He has unsuccessfully run for mayor, transportation commissioner and state Senate and was commissioner of public safety and chief administrative officer in the City of Jackson during Yarber’s tenure. He is a retired major in the U.S. Marine Corps and was a narcotics investigator from 1992 to 2009 in the Hinds County Sheriff's office.

On Monday, Archie introduced and the Board of Supervisors voted to back the renaming of the City building at 327 East Pascagoula St., which houses the Jackson Police Department, and Municipal Court, for Vance. Ward 3 Councilman Kenneth Stokes and the mayor on Tuesday, Aug. 17, separately introduced agenda items on the renaming at the Jackson City Council meeting. The Council put the motion for the property naming in the ad hoc committee.

“I know so many of us wish that Sheriff Lee Vance was still here, but what we can do is try to celebrate his life with positive memories,” Stokes said Tuesday. “To have this honor bestowed on Lee Vance, I think, will be a step in the right direction.”