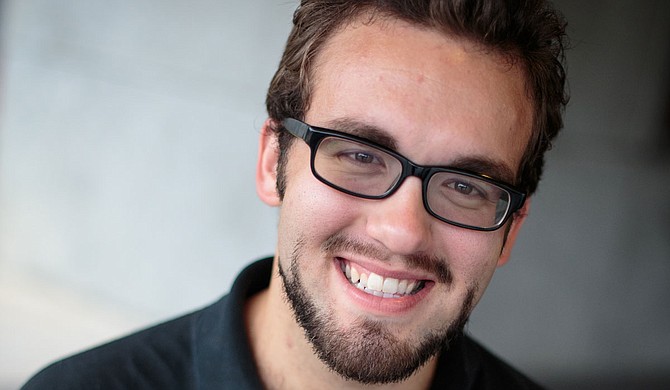 Mac Mitchell has written three plays for the Hearth & Mantel Theatre Company since it founded in 2017 and has more ideas in the works. Photo courtesy Frannie Maas

College can often be the time when we discover more about ourselves in a way that helps guide us as we choose the trajectories of our lives. Mac Mitchell entered Belhaven University his freshman year as a creative writing major, but felt something was lacking.

"Writing for me was missing something, a little unsatisfying," Mitchell says.

"I auditioned for a theater event, a night of one acts, and I just fell in love with the stage and the idea that you could write something and that you would see people physically perform it and say the words that you wrote. There was something in that that appealed to me. It felt more alive and more collaborative compared to the more isolated work I had been doing."

Taking on theater as a second major, Mitchell began developing his craft in dramatic writing. Today, he has become the residential screenwriter for the Hearth & Mantel Theatre Company.

Mitchell had been roommates with James Kenyon, founder and artistic director of the organization. Kenyon and his wife Laina founded the company in 2017, shortly after graduating from Belhaven themselves. Unable to affordably acquire the rights to put on an established play, they reached out to Mitchell. By December 2017, Mitchell's first full-length screenplay, "If I Had Wings," had been transformed into the Hearth & Mantel's first live production.

"('If I Had Wings') brought us together to do something that wasn't there before and provided a space where all of our different creative energies could combine and come together to make something," Mitchell says.

Since then, Hearth & Mantel's has produced two more of Mitchell's original plays, including "After We Become Rain" in 2018 and "The Lady With Bruce Willis Eyes" in 2019. He wrote the latter as a 10-page monologue for a college assignment. After polishing the work on and off since then following the encouragement of his friend Noel Robinson, Mitchell pitched the play to Hearth & Mantel as something to do for the spring, but the theater decided to use it for the fall's production instead. Despite the tight time window, the troupe had a functional one-woman show within two months.

"The Lady With Bruce Willis Eyes" was the first time Mitchell had the chance to work so closely with the cast and crew during rehearsals. "(H)aving someone very excited to direct and to perform the words you write—there's no feeling like it. We eventually got the story on its feet, and I was really proud of it," Mitchell says.

One aspect of theater that Mitchell particularly enjoys is the communal experience that can come during moments of a play when one can feel the collective emotion of everyone around.

"What I enjoy most about what I do is at the end of the play, the feeling when the lights go down and you know it's over, but it's broken your heart, and it's made you laugh, and it's made you reflect on things you haven't thought about in years or may not want to think about," Mitchell says. "There's this silence after the lights go down when you know everyone should be clapping, but nobody wants to break that moment. It's that feeling of being connected after what you've seen, and the process of getting to that moment is what I enjoy most—working toward something that connects us and makes us feel alive but alive together."

Next, Mitchell will be performing with Hearth & Mantel for the first time as an actor in its upcoming production of "Big Mama's Kitchen." He also has a few ideas for future plays in the works, including a comedy about a wedding.

In his spare time, Mitchell has been reading more southern literature to help him better understand where he is from and how experiencing Mississippi can bolster his own writing. He also enjoys running, which he says can help clear his head or inspire him with fresh ideas.