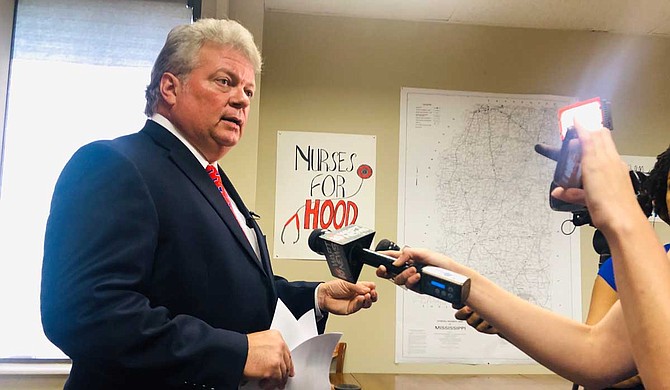 Several weeks ago, Mississippi Attorney General Jim Hood's teenage daughter went to the doctor for chest pains. He called his daughter as soon as he found out.

"Have you been vaping?" he asked her.

Hood used that story last week, while not sharing her answer, to show that e-cigarettes and vaping have been on his mind lately as a father, as an attorney general and as the Democratic candidate for governor. Even as cigarette and tobacco use among teens has fallen to historic lows, vaping use has surged in recent years. Hood claims his opponent, Lt. Gov. Tate Reeves, has blocked bills to regulate vaping after receiving campaign donations from vaping companies; Reeves denies it.

Last week, reports surfaced that a 27-year-old Mississippi woman's death may have been tied to her use of a vape, though that has not been confirmed. Since, the Mississippi State Department of Health, as part of a national federal investigation into severe pulmonary disease and lung injury related to vaping, has identified three cases of vaping-related illness in state residents between the ages of 28 and 33.

"This is a very serious concern, and one that is unfolding every day," MSDH State Epidemiologist Paul Byers said in a press release on Monday. "While we know that many of the cases in the US report vaping cannabis products, such as tetrahydrocannabinol (THC), some have reported only vaping nicotine products. There is still a lot that we don't know about what is making these people sick. No specific product such as the device, liquid, refill pods or cartridge has been clearly identified as the cause."

The press release notes that symptoms of severe pulmonary disease include "cough, shortness of breath, chest pain, nausea or vomiting, diarrhea, fever and fatigue" and "develop anywhere from over a few days of use to weeks of using e-cigarettes."

At a press conference at his campaign headquarters in Jackson last week, Hood said he agreed with President Donald Trump's recent proposal to regulate vaping. In fact, Hood said, he helped introduce two bills in the Mississippi Legislature earlier this year to regulate vapes, but both died in committee.

"I agree with the president. We ought to just ban them. But certainly we ought to regulate them," Hood said. "And that's what our regulation proposed ... And the Legislature didn't take it up or do anything with it."

Those bills, Senate Bill 2537 and House Bill 1244, would have required shops that sell vaping products to have a license to sell vapes and imposed additional regulations, like requiring vendors to only sell sealed vape pods, which contain the chemicals that produce the vapor, to ensure they cannot be tampered with. Hood said he is concerned about drugs like fentanyl being introduced into the pods.

"Somebody could be right in front of you smoking fentanyl, and you wouldn't know it unless they fell out dead in a chair," Hood said. "That's what's so scary about it. You don't know what's in that pod."

If Reeves wanted vaping legislation, he could have prioritized it, Hood said. Reeves serves as president of the Senate, where he has the power to appoint committee chairs and to champion or kill legislation if he so chooses.

"It's just because of that money over there that has gotten control of our Legislature," Hood said. "It's called legal corruption where they can get campaign contributions, and they tamp down legislation that would protect the public. And you see it when you see the lieutenant governor talking about $95,000 in contributions from these tobacco companies."

Hood provided members of the press with selections from Reeves' financial statements. Between 2009 and 2015, Reeves accepted $9,000 from Altria, the company that owns Juul, one of the most popular vape brands. Between 2012 and 2018, Reeves also accepted $38,000 from Reynolds American and its PAC. Reynolds American is a British tobacco company whose subsidiary, R.J. Reynolds Vapor Company, produces vaping products.

When asked, Hood's campaign said he has accepted $16,000 from tobacco companies and lobbyists throughout his 16 years in office.

"I was sponsoring legislation against them. I wasn't in control of what would happen with the legislation. So it wouldn't influence my decision one way or the other," Hood said.

Hood said he could not prove that Reeves intentionally quashed the vaping bills.

"You're going to have to go ask him those questions. I'm sure he's going to deny any knowledge of it. And that's the problem," Hood said.

The Reeves campaign did not respond to a request for comment, but Reeves spokesman Parker Briden did tell The Clarion-Ledger last Thursday that there is "a whole legislature at work and Tate didn't kill the bill." Briden accused Hood of "conspiracy theories and partisan blame games."

"(Reeves) recognizes we must deal with this new issue in a way that protects children's safety," Briden said.

Hood said vaping among teens reached 11% in 2018, and estimated that it may have doubled in the year since. He said that while he understands that vaping has helped some adults quit smoking, he agrees with Trump's call to ban flavored vapes.

"Adults make that decision. But what these tobacco companies that own these vaping outfits, they learned from sugared cigarettes 40 years ago is that they can put those flavors in their they can attract more young people to use their product and that's where it's hitting us," Hood said.

"While this investigation is ongoing, if you are concerned about these specific health risks, consider refraining from using e-cigarette or vaping products," the press release reads. "Adult smokers who are attempting to quit are advised to consult with their doctors about which FDA-approved nicotine cessation products are right for them."

The CDC is urging adults who used nicotine e-cigarettes to quit smoking not to return to smoking cigarettes. In its Monday press release, MSDH called on Mississippians "to not buy products off the street containing THC or other cannabinoids" or to "modify or add substances to e-cigarette products that are not intended by the manufacturer."

Voters will choose among candidates for statewide offices, including governor, lieutenant governor and attorney general in the general election on Nov. 5, 2019. Voters must register 30 days before an election to be eligible to vote.