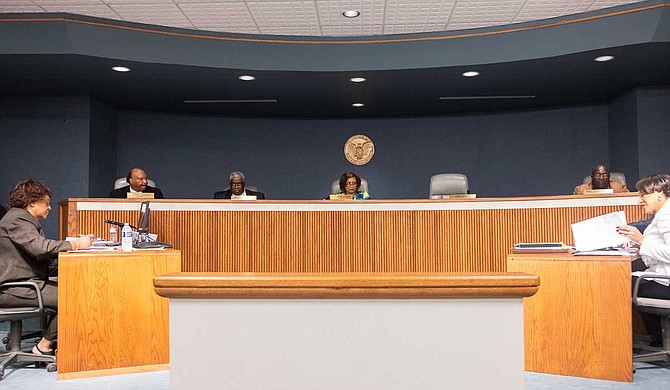 The Hinds County Board of Supervisors approved an order to dispose of files from both its office and County Administrator's office dating from 1984 to 2007 during a Sept. 16, 2019 meeting. Photo by Seyma Bayram.

The Jackson Free Press is asking the Hinds County Board of Supervisors to delay its unanimous vote yesterday to dispose of documents relating to its former administrations as well as former County Administrator's files from 1984 to 2007 without specifying the number or the content of those documents. After reviewing the State of Mississippi's records-retention schedule and guidelines for local-government records, this newspaper today sent a letter to the board expressing concern that the decision could violate Mississippi's public-records law.

Today's letter also asks the board to provide further explanation and documentation to ensure the legality of the order.

The vote occurred during the Hinds County Board of Supervisors' bi-monthly meeting on Sept. 16, 2019, after the County Administrator's office addressed the board about an "Order to Approve the Disposal of Files Related to Former Administrations of the Board of Supervisors as well as Former County Administrator's Files for the Period of from the Years of 1984-2007 (sic), Formerly Stored at the Public Defender's Building, in Accordance with Hinds County's Storage, Retention and Disposal Policy Adopted in 2017."

The board did not discuss its decision during the vote nor did it, to our knowledge to date, invite input from the public.

The Jackson Free Press has requested access to the amended 2017 policy to which the order refers as well as a list outlining exactly which files will be destroyed, whether or not any files have been disposed of since the vote yesterday, and whether the board discussed a plan to digitize any documents before destruction. The County Administrator's office had not answered these questions at press time. 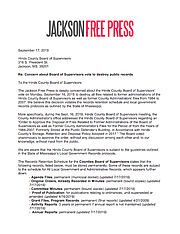 As with all Mississippi counties, the Hinds County Board of Supervisors is bound to the State of Mississippi's Local Government Records protocols. Mississippi's guidelines state that Board of Supervisors must keep the following records permanently: agenda files; original orders, already recorded in minutes; committee minutes; proof of publication; grant files and program records; activity reports (permanently if annual reports are not maintained); annual reports; policies, procedures and plans; correspondence, executive (elected and appointed officials); certain litigation files relating to "annexation, civil rights and other landmark or historical issues"; and records disposal documentation.

The supervisors control all operations and funding for the Hinds County Detention Center and the Henley-Young Juvenile Justice Center. The Hinds County Detention Center, also known as the county jail, has been under a federal consent decree since 2016 after an investigation from the U.S. Department of Justice found that the jail infringes upon the constitutional rights of detainees through lengthy pretrial incarceration. Violence, infrastructural insecurity and mismanagement, among other systemic issues, also plague the facility in Raymond.

The State of Mississippi updated many of the guidelines listed above, which the board must follow, in 2018, suggesting that the updated guidelines supersede the 2017 policy to which the Board referred in its Monday vote.

Board Attorney Pieter Teeuwissen told the Jackson Free Press today that he could not comment on the order, as it could violate attorney-client privilege, but that the county policy should follow state law.

The Jackson Free Press also called the Hinds County Board of Supervisors' and County Administrator's offices, notifying them of our concerns surrounding the legality of the order and asking for additional information and documentation that would clarify whether or not the vote to approve the order was within the bounds of the law.

District 1 Supervisor Robert Graham said today that he is confident that the order, based on 2017 county policy, followed state protocols. "I'm not familiar with the exact policy, the wording of the policy, but it is in accordance with the state policy on record retention. We are following the state law," he said to the Jackson Free Press this morning.

County Administrator Carmen Y. Davis echoed Graham's sentiments in a phone interview today. "It's not overriding the state law," she said. "It is reinforcing the policy within the county, encouraging all employees, officials and department heads to comply with the state law. So it's an internal policy making sure that we are disposing, retaining records correctly, according to state law ... and the state law is referenced in our policy."

LaVonne McGee, director of human and capital development at the County Administrator's Office, told the Jackson Free Press today that she believes confusion stems from the wording of the order, which she had drafted. "It (the 2017 county policy) has been amended. It was amended in 2018, and we sent that out ... and I just didn't put 'as amended' on the agenda item, and I apologize for that," she said. "The board approved on October 1 (2018) the incorporation of the amendments made by the Department of Archives and History into the county's 2017 policy," McGee said.

When asked whether the disposal of files from 1984 to 2007 was legal, Davis responded: "Well, our staff has reviewed it. If there's an issue with those individual files, we can review those. ... They (the staff) were supposed to process those according to the retention schedule of the state law, so we can review those to verify that."

Davis added that there was "an attachment of files" detailing a list of exactly which files will be destroyed. She, however, did not immediately provide the attachment when requested.

Files are destroyed immediately following an order such as Monday's, Davis said, adding that "since there is a question, we will hold off on destroying them, certainly, because we are not trying to be in violation of the law. And if there is a question about any of the files, I want to review them again just to make sure that we're not missing something."

The Jackson Free Press asked whether any files have been destroyed, yet. "I will have to check with the staff, I'm not sure," Davis responded.

The Jackson Free Press sent the letter to the Hinds County Board of Supervisors outlining concerns and requesting further explanation for the order. You can read the letter here. We will provide more information from the board as it comes in.