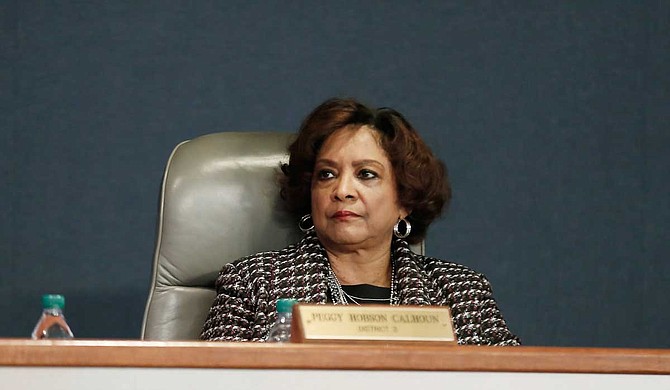 The Hinds County Board of Supervisors provided the Jackson Free Press a list of documents it plans to destroy—and we wrote to ask for enough time to examine documents about the jail, past controversies and more. Board President Peggy Calhoun wrote back with one word: "Received!" Photo by Imani Khayyam 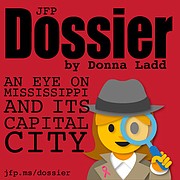 The Jackson Free Press scored a transparency victory this week, at least for now, when the Hinds County Board of Supervisors provided us a list of the documents it plans to destroy, which I addressed in last week's Dossier after reporter Seyma Bayram learned about the impending destruction. Last week, we sent the supervisors as a group and individually a letter approved by our attorneys expressing our concerns about the impending destruction of records.

After getting the list of documents they plan to destroy this week, I wrote the full board back immediately and requested that they destroy no documents until we have a chance to review them, and Board President Peggy Calhoun wrote back with one word: "Received!" I really hope that means she will not allow these documents to be destroyed prematurely.

Seyma is in New York City for her John Jay criminal-justice fellowship this week, but she and I are looking at the list and immediately saw a number of files listed that concern us, several pertaining to the beleaguered Hinds County Detention Center, which is under a federal consent decree to improve conditions—a major issue in Hinds County elections this year.

Just from a cursory read of the list of documents slated to disappear, we see a report on an investigative task force from 1994, a memo on the investigation, breakdown of expenses, prisoner status, grand jury subpoenas, financial analysis of detention center expansion, and jail contracts with telecommunications companies. There's even a 2008 letter from the Mississippi Department of Health on a sanitation report at the county jail.

And that's just from a cursory read. Bottom line: We, our attorneys and other media if interested, as well as members of the public, must be allowed sufficient time to examine all these documents before they are erased from history. 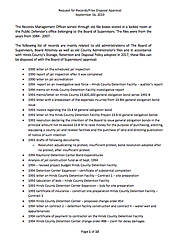 Thus, I will reiterate what I said in my email to the supervisors: No Hinds County records should be destroyed until we have a chance to examine them and request copies as needed, as well as to satisfy concerns that the destruction of the records on the list are legal. We also seriously want to know why, in 2019, the board isn't choosing to digitize these records before destruction, which Hinds County Administrator Carmen Davis confirmed was not happening.

Voting records and documents related to detention facilities and other publicly funded services over the years are vital historic documents, and they should not be destroyed without a trace. They are also records of work that the taxpayers funded. In addition, there should be no rush to do this, and the process of examining the records must be given the time needed.

In addition, why destroy records before new supervisors take their seats? They should have the option of examining all records as well. This may not be an exercise in hiding information, but if it is not, why the rush? It does not look good at the very least.

Shining a Light into Public Meetings

In addition to the three city and county transparency issues I detailed last week in the Dossier, Seyma also ran into two others. First, she was seeking the agenda to the Jackson Public Schools board meeting because it was slated at the same time of Jackson City Council (boo, hiss). She e-mailed JPS the same day and was told that they are usually made available on the day of the meeting. Bottom line, she got it in email the day after the meeting.

We're well aware that JPS is working hard to repair systems in the district under the new superintendent, but we do ask that meeting notices and agendas be readily available, preferably posted online, with enough time to prepare for meetings and to alert the public as to what they will be discussing.

Then on Friday, Seyma went to the Jackson Police Department headquarters to attend her first COMSTAT meeting, where police leaders typically go over crime stats and "hot spots" from around the city and hear from police commanders after upcoming focuses. With criminal justice one of her focuses from her graduate work at the Columbia Journalism School (and a major reason I hired her), Seyma was excited for the meeting. She and I had both checked on the time with JPD's communications staff—2 p.m. on Sept. 20.

The JFP's Work on Public Transparency

She showed up across the street at JPD headquarters, and no one knew what was up with the meeting at first. She waited and kept asking. Finally, she was told JPD had met at 10 a.m. Considering that these meetings are public, no notice went out to the public about it that we are aware of, and certainly they did not alert the reporter and editor who had specifically requested the time about the change. This meant that Seyma planned her day around that meeting, which she had planned to write up for her next JFP Daily piece.

We're not saying it was on purpose. In fact, the communications officer wrote us this week in response to her request and said he told her by phone that it is at 10 a.m. every Friday, which is hard to confirm one way or the other. (They're calling it the Uniform Crime Reporting meeting now; it also used to be weekly with PDF of weekly crime statistics provided.)

If she heard it wrong, our bad.

Both "sunshine laws" and the actual practice of them matter to democracy, open government and accountability. Public servants do not follow them for two reasons: (a) they're trying to hide something or (b) they're careless and don't take them seriously. And no, being busy is not an excuse. That is the price one pays for being paid with taxpayer money. You must be accountable to the taxpayers, no matter what.

Notice of these public meetings must be posted online in advance with the ability of media and the public to know when they occur and to double-check times and dates. This needs to be someone's job to keep up. (The officer said JPD doesn't maintain the City's website so can't guarantee the posting.)

This feels like disorganization, but it only hinders public transparency. The mayor promised better transparency when he ran for office, and we call for him to insist that all department heads follow that principle, including meeting notices including about changes and ensure that proper tools and training are providing to get that information posted promptly. The public and the media who represent them deserve ample notice for all meetings and documentation in advance. All of them work for us and need to communicate to all of us well.

This also applies to public records. A few weeks back, I finally got a response to a public-records request I made from the City of Jackson in 2017 when I was working on a story about the new hotel slated for Fondren. Now that the hotel is almost built, the City is trying to both provide me those documents two years late—and to charge me for them.

This week's hot take: No, WJTV, we are not interested in registered for your next governor's debate in Hattiesburg where only your journalists will be allowed in the debate room once the debate starts. Thanks, anyway.