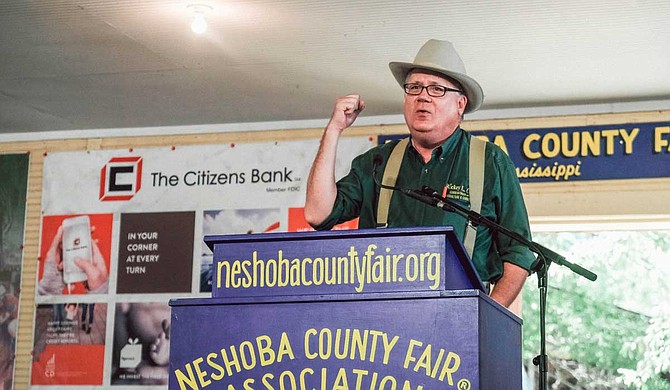 Mississippians will no longer have to pay a sales tax when they buy Mississippi-grown foods at the grocery store if the Democrat running for the state's top agriculture position gets his way.

Rickey Cole, the 53-year-old Democratic nominee for commissioner of agriculture, first unveiled his plan to end the 7% tax on any food product that the state's farmers grow on Sept. 30. He says it would bolster the state's economy and local businesses.

"Ninety percent of the food we eat in Mississippi is brought in from out of state—much of it from foreign countries," Cole said. "So now we have to pay tariffs, we have to pay income tax, and then we have to pay taxes again at the cash register. We spend nearly $6 billion a year on this long-distance or foreign food when we could be producing much of what we eat right here in Mississippi."

Cole, who served as the Mississippi Democratic Party chairman from 2001 to 2004, is challenging incumbent Commissioner of Agriculture Andy Gipson, the Republican nominee. Mississippi Gov. Phil Bryant appointed Gipson, then a conservative member of the Mississippi House of Representatives, in 2018 after Cindy Hyde-Smith left the position to go to the U.S. Senate that same year.

Cole, who is 53, is from Jones County in southeast Mississippi, where his 160-acre family farm in Ellisville produces beef, fruits, vegetables and timber. His farm, he said, sells a significant chunk of its product at local farmers markets or directly to consumers.

"I'm in this race because Mississippi needs an agriculture commissioner who knows commercial agricultural production and sales. I have a lifetime of experience in both aspects of the business," he said.

If Mississippians redirected just one-sixth of their food purchases from outside sources and toward buying from local growers, Cole estimated that could create 13,000 new jobs in the state. That, he noted, would be double the 6,500 jobs the Nissan plant in Canton created.

Cole told the Jackson Free Press on Monday that he based that figure on estimates from the Mississippi Food Policy Council.

Cole, who studied Agriculture Economics at Jones College in Ellisville, said that becoming the "Commissioner of Food" is his "dream job"—not a "stepping stone" to a higher office. He told the Jackson Free Press on Monday that he has significantly more experience in farming than Gipson, who is a corporate lawyer in Jackson at Jones Walker LLP. There, Gipson specializes in "securities, banking, communications, and insurance regulatory law," the firm's website notes.

Still, Gipson, who is also a Southern Baptist pastor, does have his own agriculture bonafides. The Simpson County native has managed a cattle operation there for two decades and also runs a tree farm.

Cole is critical of President Donald Trump's tariffs on Chinese aluminium and steel products because China has hit back hard with tariffs on U.S. farm products—putting Mississippi's small farmers under financial stress. Gipson, a Trump supporter, has abstaining from levying criticism at his own party's leader. In July, though, he did praise Trump for bailouts designed to help farmers weather the storm of the ongoing trade war.

"While the federal administration is dealing with retaliatory trade tariffs, I applaud USDA's action to help our hard-working farmers, who are working through these challenges," Gipson said in a July press statement. "I appreciate the work of President Trump and his administration, including Secretary of Agriculture Sonny Perdue, to provide this much needed assistance to our farmers."

One Mississippi lawmaker, House Rep. Jeramey Anderson, D-Moss Point, has repeatedly introduced bills designed to go even further than Cole's recent proposal by ending the collection of sales taxes on groceries altogether, regardless of whether they are locally produced or imported. One such bill, House Bill 1343, died in committee in February without ever getting a vote.

Anyone who registered to vote by Oct. 7 is eligible. To cast a ballot, voters must bring a state-accepted form of photo ID.

Voters will also choose new leaders in the races for attorney general, lieutenant governor, treasurer, secretary of state, and other statewide offices on that day. All Mississippi House and Senate races will also be on the ballot.