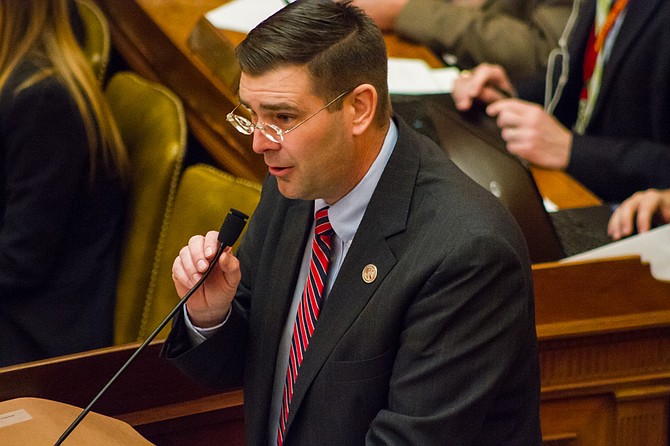 Rep. Andy Gipson will succeed fellow Republican Cindy Hyde-Smith once she moves to the U.S. Senate. He will serve the rest of the current commissioner's term, which ends in January 2020. Photo by Stephen Wilson.

Rep. Andy Gipson will succeed fellow Republican Cindy Hyde-Smith once she moves to the U.S. Senate. He will serve the rest of the current commissioner's term, which ends in January 2020.

Gipson, 41, is an attorney and Baptist pastor and has been in the state House since 2008. His family lives on a farm in Braxton, and he has been posting photos and videos on Facebook of fresh eggs from their chickens and milk from their cows.

"I want to see us grow the pie, let the pie grow of agriculture— not regulate it too much, not put it out of business, not shrink it, but to grow it," Gibson said as he stood with Bryant during a news conference at the Mississippi Museum of Agriculture and Commerce.

Gipson said he intends to fulfill his role as commissioner with a conservative governance philosophy, vowing to work with President Donald Trump's administration and Mississippi members of Congress to "roll back burdensome regulations that hold opportunities down for Mississippi."

Bryant got his own start in statewide office in 1996, when then-Gov. Kirk Fordice plucked him from the Mississippi House to become state auditor. Fordice said he saw Bryant as a bright young conservative who believed in limited government.

"I see a lot of characteristics in Andy I hoped to have as a young man coming into the state auditor's office," Bryant said. "Being a farmer, a lawyer, a former legislator, he has just the professional qualifications — better than I did coming into state auditor."

Bryant announced Feb. 21 that he was appointing Hyde-Smith to succeed Republican Thad Cochran, who is leaving the Senate because of health concerns. Cochran retires Sunday.

Hyde-Smith and at least two other candidates — Democrat Mike Espy, a former congressman who was President Bill Clinton's first secretary of agriculture, and Republican state Sen. Chris McDaniel — say they are running in a nonpartisan November special election to fill the rest of the Senate term, which ends in January 2021. Other candidates could join the race.

Hyde-Smith, who is a cattle farmer in Brookhaven, served 11 years in the state Senate as a Democrat before switching to the GOP in late 2010. She won statewide races for agriculture commissioner as a Republican in 2011 and 2015. She was the first woman to hold that job, just as she will be the first woman to represent Mississippi in Congress.

Gipson is chairman of the House Judiciary B Committee and has been an advocate of gun rights and an opponent of abortion. During the nearly three-month legislative session that ended Wednesday, he was one of the authors of House Bill 1510 , which bans abortion after 15 weeks. Bryant signed the bill March 19 and it became law immediately, prompting a lawsuit from the state's only abortion clinic. A federal judge temporarily blocked the law the next day.